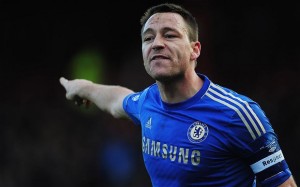 From the youth set-up to the first-team to captaincy. John Terry has done it all for Chelsea Football Club and is probably the biggest legend they will ever have.

Still at the club and still playing on a regular basis, this tally will certainly increase over the next few seasons until he finally calls it a day.

Jose Mourinho’s return to Chelsea has done wonders for Terry’s career which looked like it was nearing it’s end at one point.

He played every minute of the Premier League campaign this season.