Number 1 on our list of Stunning Premier League moments: It’s been over 20 years, but Eric Cantona kung-fu kicking a fan in the stands of Selhurst Park. Having been sent off in the 1-1 draw between United and Crystal Palace, Palace fan Matthew Simmons rushed down 11 rows of Selhurst Park’s main stand to taunt the Frenchman as he left the field. Simmons claimed he shouted: ‘Off you go Cantona – it’s an early bath for you!’, and what happened next was incredible. Cantona lost all control, breaking away from Norman Davies, the United kitman escorting him down the tunnel, jumping over the advertising hoardings to aim a kung-fu kick at Simmons before following up with a series of punches. The punishment was severe: the FA banned him for nine months, calling the attack ‘a stain on our game’, he lost the France captaincy and was never selected for his country again, while a two-week jail sentence was reduced on appeal to 120 hours of community service. United eventually lost out on the title, too. 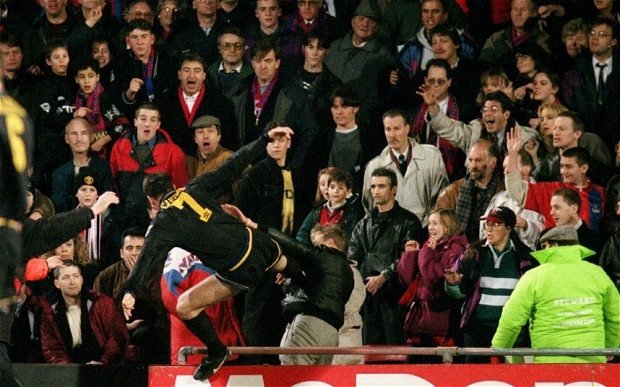