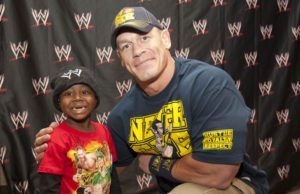 The most successful wrestler in the wrestling industry makes his way into second spot on the most charitable sports stars in the world. The leader of Cenation is famous of his charity works through out his career as a professional wrestler. He has been associated with Make-A-Wish Foundation and Cena holds the record for granting almost 500 wishes with Make-A-Wish Foundation.  He is also supported Susan G. Komen to raise funds and awareness for breast cancer through John Cena’s sheer dedication in Charity works

Since his partnership with Susan G. Komen in 2012, The WWE has raised over $1.5 million in the support funds and awareness for breast cancer. Just recently John Cena work pink during his wrestling match to support cancer patients.