The big game in the Capital One Cup Third Round sees North London rivals Tottenham and Arsenal square off tonight at White Hart Lane. League form goes out of the window when it comes to cup competition, especially between fierce rivals like these two.

With that in mind, I have compiled a combined XI from these two clubs. 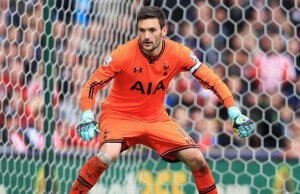 The French stopper gets the nod ahead of Arsenal counterpart Petr Cech in this line up. Cech has a wealth of Premier League experience, and a couple of winners’ medals. However, since a £10m move to Arsenal in the summer, he has struggled to recapture the form that made him one of the very best stoppers in Europe. He made a high-profile error on his Gunners league debut against West Ham.

Lloris, while he does not have the English top-flight experience, or success, that Cech has, has established himself as the number one at White Hart Lane, and has had a more consistent start to this season than Cech. That is enough for him to be between the sticks in this line-up.