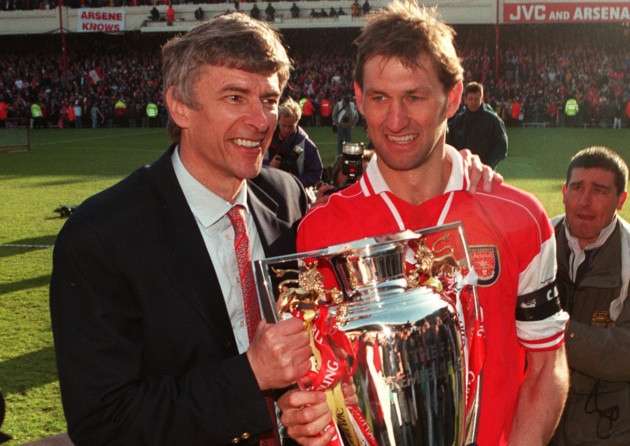 Arsenal great Tony Adams says he does not think he will be able to return to the club in a coaching capacity while Arsene Wenger is in charge.

The Arsenal legend also stated that his willingness to stand up to Wenger, and occasionally disagree with the Frenchman, counted against him.

Adams went on to say that he feels Wenger is “Essentially not a coach” – an opinion a lot of Arsenal fans this season have been echoing.

“Perhaps Arsene thought I might be too challenging for him.

“He seemed to like an assistant such as Pat Rice or Steve Bould, both great club men who were not going to ruffle feathers.

Arsene is so dominant that he was probably not going to like it if I said, ‘We’re conceding bad goals, I’m going to take the back four today and organise them’.

“Because Arsene is essentially not a coach – and that is the second reason why I believe he didn’t want me.

“Back in the day, I said in an interview coaching wasn’t Arsene’s strong point.

“Actually in the original draft, I said he couldn’t coach his way out of a paper bag.

“And, though I modified that in the final article, it didn’t go down well.

“It all left me feeling that I would never get a chance in any capacity while Arsene was there.

“Much as I respected him for his long and successful tenure, my occasional willingness to pass comment on him and the team probably counted against me.”

Adams also went on to claim that Manchester United tried to sign him from Arsenal twice, and that he turned them away on both occasions.

“I turned them down both times because I was Arsenal through and through,” he wrote.

“At the time, the wages weren’t going to be much better, and I was stuck in my drinking and the London life with my mates and family around me.

“I wouldn’t have had the tools to cope up in Manchester on my own.

“The second United approach came in 96, in the autumn just five weeks after I had stopped drinking, and in that period of uncertainty when Arsene Wenger was taking over from the sacked Bruce Rioch.