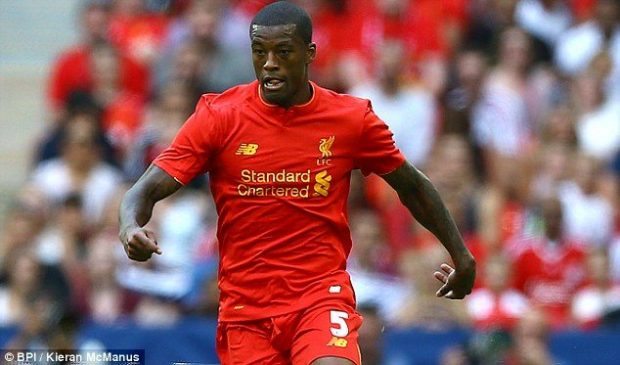 The club’s bid to take their first title since 1990 continues tonight as they travel to Goodison Park for another Merseyside derby vs Everton.

The Reds currently trail impressive leaders Chelsea by 9 points, despite having already beaten them away, and tonight is a huge chance to close that gap.

“I have faith and confidence we can win the Premier League,” he told Sky Sports News HQ.

“The season is long so we can improve a lot and we must do everything. We must believe in it and then it is possible.

“Leicester won it last season so I think that was an eye-opener for a lot of teams in the Premier League.

“From the beginning until now, it is only getting better. It’s not always the result we want – we have played a few draws and defeats, not against big opponents – but that is how it is in the Premier League. Anyone can beat anyone.”

Wijnaldum has faith in his manager, Jurgen Klopp, who won two league titles in Germany with Borussia Dortmund before coming to Anfield last year,

“He is a big character and also a good manager,” Wijnaldum added. “He’s a manager who gives the players a lot of confidence and that starts before you play the game.

“The way he hugs you and gives you a feeling he is behind you no matter what, that he has faith in you to play a good game. That’s already a good sign for the players and every time we play, we have confidence.

“Even if we win, after a good game like Middlesbrough for example, he always sees things to do better.

“He is always searching for the perfect thing and that’s great as a manager because he knows we can do better and he wants us to do better.”

Wijnaldum signed in the summer from Newcastle for around £25m, and says his derby experience in the north east and in the Netherlands will help him when Liverpool travel to Goodison Park to face rivals Everton.

“I already played Newcastle against Sunderland and in Holland I played Feyenoord against Ajax, PSV against Ajax and Feyenoord, so I have played a lot of those matches,” he continued.

“For the fans they are the biggest matches of the year and I think that will make the atmosphere even greater.

“Everton are at home so the fans will expect them to win because it’s a home game. For us it is pressure because we are one of the teams that can win the title this year so we have to win the game.

“Also because it’s a derby every Liverpool fan wants us to win the game so there will be pressure for both sides.”