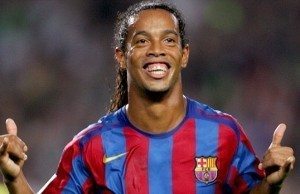 Ronaldinho Gaucho is undoubtedly the most famous Brazilian to ever play football. Known for his amazing skills, free kicks and shooting abilities well, let’s not forget that famous smile of his. Tell me who can hate this player? He might be on the Top 10 Most Selfish Soccer Players of All Time but you just can’t seem to hate him.

The Brazilian enjoyed the best of his career from 2003-2008 while playing for Barcelona, his brilliant style of play earned himself two consecutive Ballon d’OR awards in 2004 and 2005 respectively.

Now aged 35, well it doesn’t seem the Brazilian will ever play in the Premier League.