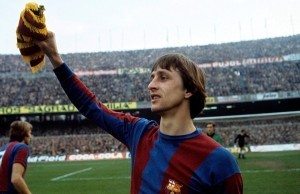 Johan Cruyff takes up fourth place. The Dutch is regarded as the best Dutch player of All Time. Johan Cruyff won the Ballon d’OR an outstanding three times in the early 70’s while playing for AFC Ajax and Barcelona. As a player he only played for Barcelona, Ajax, Levante, Barcelona, Ajax, Levante, Feyenoord and a couple of small team which are not in the Premier League.n After retiring from professional football he went into coaching and coached former club Ajax, Barcelona and Catalonia.