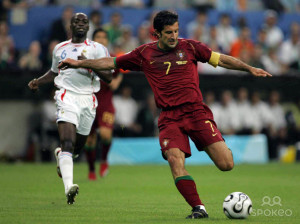 Another stunning footballer to watch comes in at sixth on our list as Luis Figo failed to win anything with Portugal.

Despite his success at club level with Spanish giants Real Madrid and FC Barcelona, the Portuguese midfielder just couldn’t help his national team over the line during major tournaments.

Figo managed to make 127 appearances for Portugal, making him the most capped player for the nation, but sadly for him, throughout his glittering career, he couldn’t guide them to glory.

He was part of the Portugal team in 2004 that came runners-up in the European Championship.