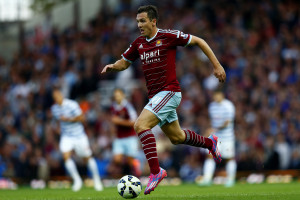 What a turnaround this guy has had.

Ridiculed for a lot of his career, Stewart Downing has all of a sudden found himself and actually had quite a fruitful campaign at Upton Park.

Playing in a new central role, Downing was one of The Hammers’ better performances during their impressive start to the season and with an average pace of 21.81mph, he has been a constant threat for the London club,