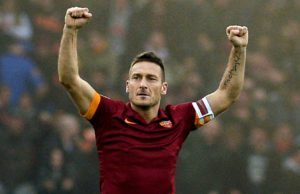 As both the club’s all-time top scorer and most capped player in the club’s history, Totti’s place in Roma’s history books is a significant one.

With 290 goals and 181 assists, Totti has enjoyed an incredible 21 years in the Italian capital and is considered as one of the best players of his generation.