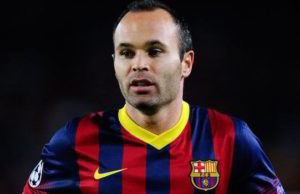 Another Barcelona great to make the grade is Iniesta. The 32-year-old, like so many of the club’s Spanish contingent, graduated through the club’s youth ranks and has helped the club to La Liga, Champions League and cup glory, since making his first team debut in 2002.

An integral part of the club’s midfield and a world class player, Iniesta’s loyalty to the Catalan giants has never been in question.