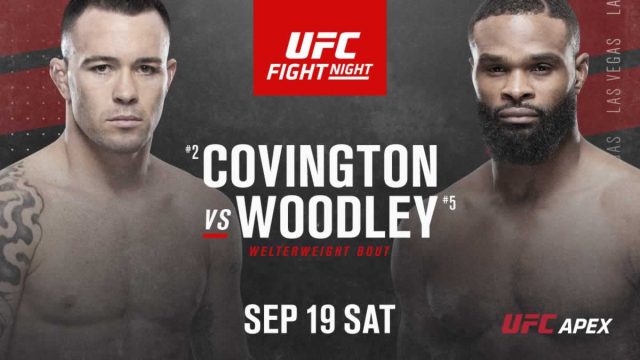 After last weekend’s strawweight showdown between Angela Hill and Michelle Waterson, we are set for another exciting round of fixtures on Saturday night. The UFC Apex Facility has been the sole venue for all UFC events since the COVID-19 pandemic hit across the globe. There was a series of four fight nights at Yas Island in Abu Dhabi back in July but all other events have been hosted right here in Las Vegas.

UFC Fight Night 178 went through a lot of hoops to finally get here and two big names will be headlining the event – Colby Covington and Tyron Woodley.

Former training partners, Chaos and The Chosen One will be heading into this fight with a special energy between them. A rivalry has been brewing between them ever since Woodley got named the UFC division champion in 2017. Covington’s claim to the throne has been laid bare and both these fighters have been going at each other on social media for years now.

Woodley is 38 now and entering the twilight of his fight career. But he still has plenty left in the tank, enough to retain his UFC title. Covington much younger at 32 wants to come back from his defeat to Kamaru Usman. He had his seven-fight win streak snapped by the UFC Welterweight champion.

The Covington vs Woodley fight kicks off on Sunday morning 20th September 2020 at 02:00 CEST / 01:00 AM UK time at UFC Apex Facility, Las Vegas, USA. The MMA clash between Covington and Woodley is the main card of the UFC Fight Night 178 gala.

In addition to the welterweight fight, we will be waiting to see Donald Cerrone take on Niko Price in the same division. If you are a UFC fan, then you simply can’t miss this fight! Watch & Bet on Sports Here =>

Covington vs Woodley Betting: How to bet on UFC Fight Night 178?

As it stands, the odds are in favour of Colby Covington. He is the favourite to win this UFC fight but by a healthy margin. The betting companies bet on “Chaos” to win. bet365 has Tyron Woodley as the second favourite to win with the odds 3.75 and odds of Covington is 1.28.

The betting odds for Covington-Woodley are in favour of Colby Covington. Even after suffering a knockout punch from Kamaru Usman in December, “Chaos” will be aiming to beat another titleholder in his career. His relentless pace has already seen him through victories over former UFC champions, Robbie Lawler and Rafael Dos Anjos.

Woodley is also Covington’s former training partner who had the interim belt for three years. He defended his welterweight title against Stephen Thompson, Demian Maia and Darren Till. The veteran now plans on putting his heated rivalry with Covington to rest. To what lengths will he go this Saturday? 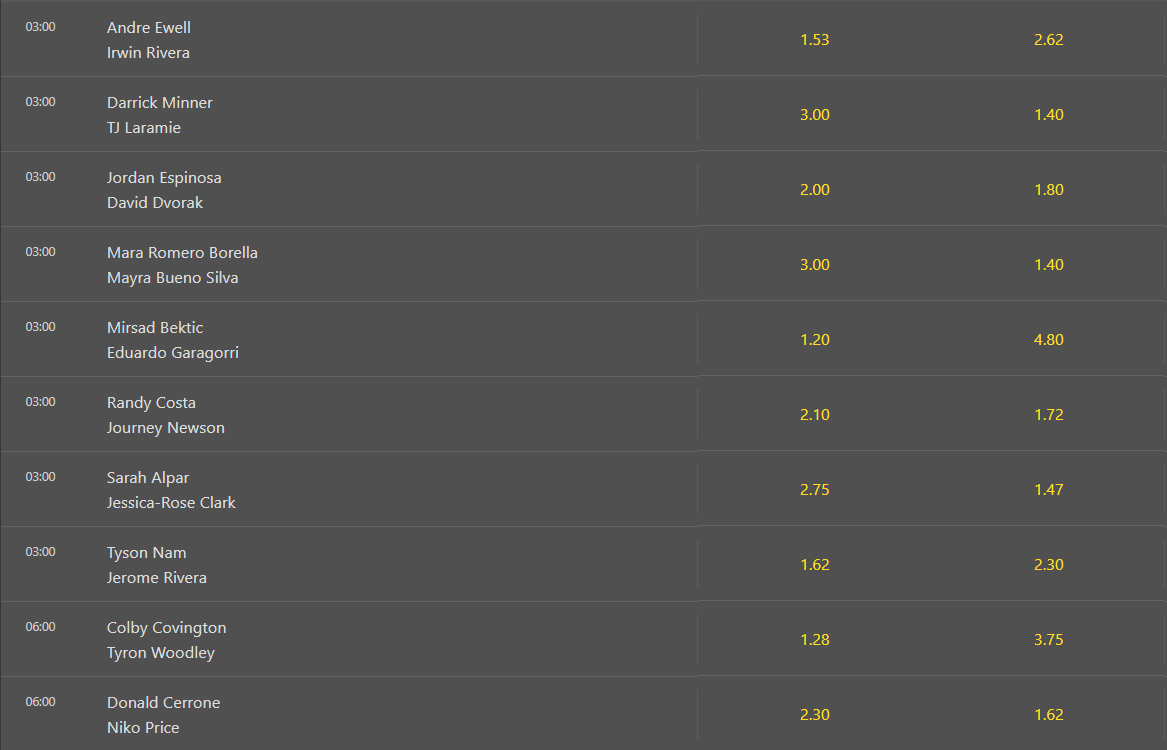 What time will Covington vs Woodley clash start?

What time will Covington-Woodley fight start? The Undercard’s coverage starts around 10:00 PM in the UK. The main event, the fight between Covington vs Woodley, is scheduled to start at after 1:00 AM GMT UK time and 08:00 PM ET US time.

Covington-Woodley UK & US TV does not appear on any ordinary channel that is free and the UFC Fight Night 178 is shown mainly on paid channels and pay-per-view.

Who shows Covington-Woodleys MMA fight on TV in the US and UK?