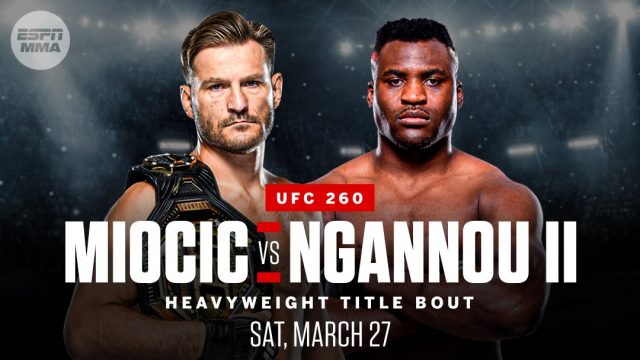 UFC 260 will see two of the biggest names in the heavyweight MMA clash off for the ultimate title belt. Stipe Miocic got the best of Francis Ngannou in their first meeting in UFC 220. Since then, both fighters have gone through a host of other fighters and come out stronger.

This will be a battle which will ultimately decide who remains on top. If you want to make your pick on the best fighter, read on below! Watch & Bet on Sports Here =>

UFC 260 went through a lot of hoops to finally get here and two big names will be headlining the event – Stipe Miocic and Francis Ngannou.

Francis Ngannou lost against Derrick Lewis consecutively after taking the beating against Miocic. What he did next was unthinkable. He knocked out all four of Curtis Blaydes, Cain Velasquez, Junior Dos Santos and Jairzinho Rozenstruik in a combined 162 seconds. He is back for revenge and Miocic will have the chance to improve his title-defence to four fights.

The Miocic vs Ngannou 2 fight kicks off on Saturday evening, 27th March 2021 at 04:00 AM CET / 03:00 AM UK time at UFC Apex Facility, Las Vegas, USA. The MMA clash between Miocic and Ngannou is the main card of the UFC 260 gala. In addition to the light heavyweight fight in the men’s division, Tyron Woodley and Vicente Luque will be facing off against each other in a welterweight bout. Watch & Bet on Sports Here =>

There are several markets you can bet on UFC 260 from. Check bet365 TV to see if they show UFC 260: Miocic vs Ngannou 2 fight via live streaming. Unibet TV =>

As it stands, the odds are in favour of Franics Ngannou. He is the favourite to win this UFC fight but only by a slim margin. The betting companies bet on The Predator to win. bet365 has Stipe Miocic as the second favourite to win with the odds 2.00 and odds on Ngannou is 1.80.

The betting odds for Miocic and Ngannou are in favour of Francis Ngannou. The Predator has been thoroughly dominant ever since losing to Miocic and then to Derrick Lewis. He badly wants to get his hands on the belt.

At 34, he has worked hard to defend against a takedown. What seperates him is his killer striking power which not one of the last four fighters have been able to survive. 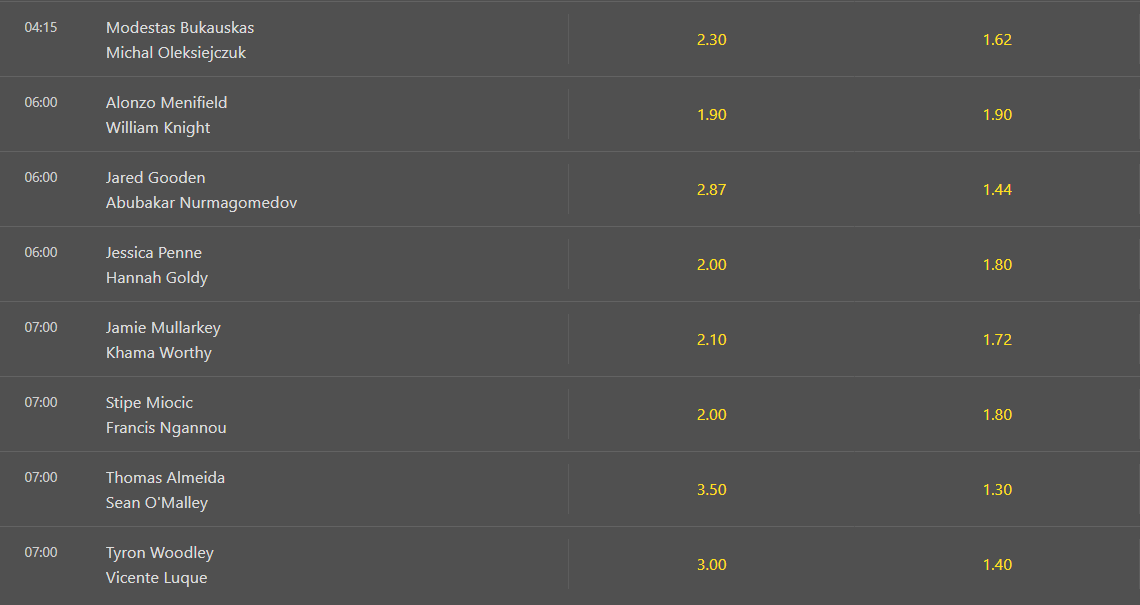 What time will Miocic vs Ngannou 2 clash start?

What time will Miocic-Ngannou fight start? The undercard’s coverage starts around 11:00 PM in the UK. The main event, the fight between Miocic vs Ngannou 2, is scheduled to start after 03:00 AM GMT UK time and 11:00 PM ET US time (6 March).

Miocic-Ngannou UK & US TV does not appear on any ordinary channel that is and the UFC 260 is shown mainly on paid channels and pay-per-view.

Who shows Miocic-Ngannou MMA fight on TV in the US and UK?