After last weekend’s bantamweight showdown between Holly Holm and Irene Aldana in the women’s division, we are set for another exciting round of fixtures on Saturday night. The Flash Forum in Yas Island has been the only other venue other than the UFC Apex Facility in Vegas hosting fights through the COVID-19 pandemic.

UFC Fight Night 179 went through a lot of hoops to finally get here and two big names will be headlining the event – Marlon Moraes and Cory Sandhagen.

The Sandman is coming into this fight after losing to Aljamain Sterling in UFC 250. He could not defend against gruesome choke and suffered his second UFC defeat. Marlon Moraes, on the other hand, thinks this is the right fight for him after beating Jose Aldo and still missing out on a title shot.

“I think Cory is a better version of Dominick Cruz,” Moraes told reporters on UFC on ESPN+ 37 media day. “I want to get in there and show the calibre of fighter I am. Getting there against a highly skilled opponent like Cody. Cody’s not an easy fight for anybody. In my opinion he’s one of the best fighters in the division and he’s one of the hardest guys to fight.”

Fans were angry to see Aldo get a shot at the belt even after two consecutive defeats while Moraes get thrown down the pecking order. The Brazilian himself has no complaints and believes he will get his chance in due time.

The Moraes and Sandhagen fight kicks off on Sunday morning 11th October 2020 at 02:00 CEST / 01:00 AM UK time at Flash Forum, Abu Dhabi, UAE. The MMA clash between Moares and Sandhagen is the main card of the UFC Fight Night 179 gala.

In addition to the bantamweight fight, we will be waiting to see Edson Barbosa and Makwan Amirkhani in the featherweight division. If you are a UFC fan, then you simply can’t miss this fight! Watch & Bet on Sports Here =>

Moraes vs Sandhagen betting: How to bet on UFC Fight Night 179?

As it stands, the odds are in favour of Cory Sandhagen. He is the favourite to win this UFC fight but by a narrow margin. The betting companies bet on “The Sandman” to win. bet365 has Marlon Moraes as the second favourite to win with the odds 2.10 and odds of Sandhagen is 1.72.

Despite Sandhagen coming off a defeat and Moraes beating Aldo in his last fight, it is The Sandman who is tipped to win. Moraes thinks the matchup is logical following him getting ditched for the title shot. To what lengths will he go this Saturday? 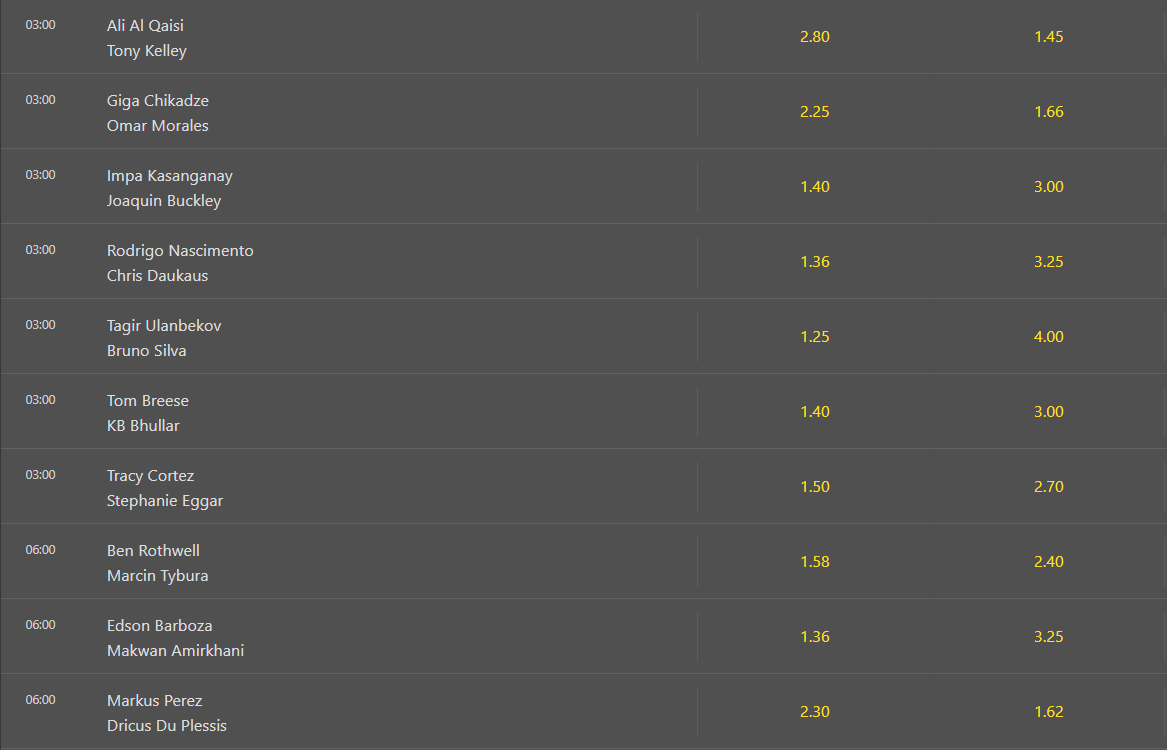 What time will Moraes and Sandhagen clash start?

What time will Moares-Sandhagen fight start? The undercard’s coverage starts around 10:00 PM in the UK. The main event, the fight between Moraes and Sandhagen, is scheduled to start at after 1:00 AM GMT UK time and 08:00 PM ET US time.

Moares-Sandhagen UK & US TV does not appear on any ordinary channel that is free and the UFC Fight Night 179 is shown mainly on paid channels and pay-per-view.

Who shows Moares-Sandhagens MMA fight on TV in the US and UK?