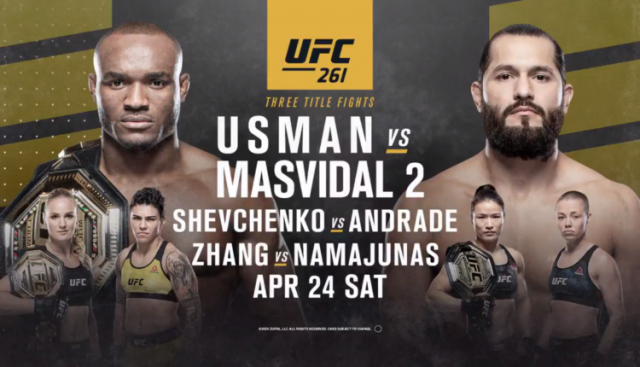 When is UFC 261? Usman vs Masvidal 2 date? UFC 261 date and time? After rescheduling, when is the UFC 261 fights? We are really in for a thriller this time around with the UFC 261 date, time & location announced.

UFC 261 will be all about the welterweight championship rematch between Kamaru Usman and Jorge Masvidal. They previously clashed in UFC 251 where Usman defended his title via unanimous decision. This will be the first UFC event with a fully live audience since the COVID-19 pandemic began.

Other than the Welterweight headlining fight, there will also be two other title fights. We are set for another high-octane weekend of fighting for us to bet on. Watch & Bet on Sports Here =>

2021 started off with some massive names upstaging each other on the white canvass. Now in the fight sheets of UFC, we are ready to see Jorge Masvidal challenge Kamaru Usman for the welterweight title a second time.

Nine months after colliding with each other, both fighters are set to take each other on in an a highly-anticipated rematch. Unlike last time, both have received enough time to prepare themselves and the fight will go ahead without any excuses from either camp.

Usman gallantly defended his title a third consecutive time earlier in the year. It took a lot out of him to beat his former teammate and training partner, Gilbert Burns. Now, he has an undefeated 13-0 record in the UFC. It was Masvidal’s constant baggering in public that drew The Nigerian Nightmare into this second fight. He finally has the chance to shut him up for good.

The main card is scheduled to begin at 3:00 AM (25 April) BST, with a full preliminary card beginning at approximately 10:00 PM ET (USA).

Usman vs Masvidal 2 Fight Date, Time & Location: When is the UFC 261 date?

Fight fans across the world will be tuning in to see this pair step into the octagon and duke it out in the main event of UFC 261. Watch Usman vs Masvidal 2 fight on bet365. All live covering info about TV schedules, TV channels and other info regarding the Usman – Masvidal UFC 261 Welterweight fight will be provided here.

Kamaru Usman’s dedication is beyond belief, seeing how quickly he is returning to the Octagon. This is his chance to take a strong lead in the Fighter of the Year race. As for Masvidal, the Miami native asked for this. The one thing that has eluded his entire career is the title belt and he has the golden opportunity to grab it.

Usman vs Masvidal 2 fight kicks off Sunday morning, 25 April at 04:00 CET / 03:00 UK time at VyStar Veterans Memorial Arena, Florida, USA. The MMA clash between Usman and Masvidal is the main card of the UFC 261. If you are a UFC fan, then you simply can’t miss this fight! Watch & Bet on Sports Here =>

When is the Usman vs Masvidal 2 fight?

When is the Usman – Masvidal fight in MMA? The Welterweight clash between Usman and Masvidal will take place on Saturday, 24th April 2021 at VyStar Veterans Memorial Arena in Florida, USA.

What venue is being used for the Usman vs Masvidal 2 fight?

VyStar Veterans Memorial Arena will host the UFC 261 gala in Florida, USA, the fight between Usman vs Masvidal 2.

The betting odds for Usman and Masvidal are heavily in favour of Kamaru Usman. “The Nigerian Nightmare”, now 33, registered the fastest knockout in UFC history in 2019 and claimed the BMF title at UFC 244, has been on a tear. He took down Burns last summer and is ready to defend his belt once again.

Where can I see Usman – Masvidal UFC Welterweight fight in MMA UFC fight for free on TV? Which channels show Usman – Masvidal? The Usman vs Masvidal 2 fight is being shown live on BT Sport 1 in the UK.