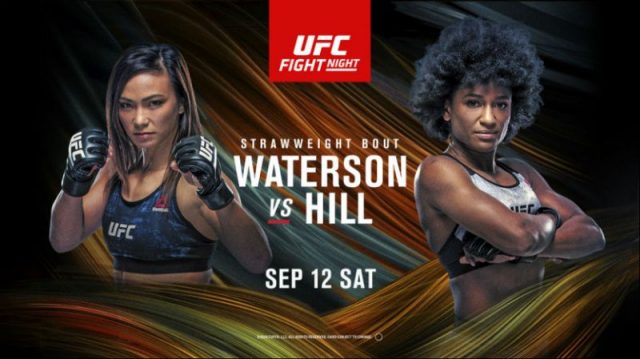 This weekend’s UFC Fight Night 177 was supposed to be headlined by Thiago Santos and Glover Teixeira. As is the ongoing theme, Texeira tested positive for Coronavirus and the entire match had to be rescheduled. That means, two dangerous Strawweight ladies, Michelle Waterson and Angela Hill will face each other as the main event on September 12.

We saw an exciting even though short round of fights last weekend, where Alistair Overeem and Ovince St. Preux made headlines with their dominant showing. Now, Strawweight fighters, Michelle Waterson and Angela Hill will be headlining the UFC Fight Night 177 on ESPN. Who do you think will come out the winner, “Overkill” or “The Karate Hottie”?

There is a serious ongoing rivalry between Hill and Waterson building up over the last few months. Trash talking on social media, aggressive confrontations during weigh-in – you name it. Whoever comes out the winner, could get a straight shot at the title in the strawweight division.

Both women are highly reputed in the UFC. They are technically very adept and have a very controlled approach to fights. Hill is the favourite but anything can happen on Saturday.

Hill suffered a split-decision loss to Claudia Gadelha after winning three on the trot. She put on a strong performance but could not nudge the judges’ cards in her favour. She has lost momentum because of the defeat but Waterson has not been any better either. “The Karate Hottie” was completely exposed by former champion, Joanna Jędrzejczyk in a five-round tie and then by Carla Esparza.

Waterson vs Hill fight kicks off Sunday morning, 13 September at 02:00 CEST / 01:00 AM UK time at UFC Apex Facility, Las Vegas, USA. The MMA clash between Waterson and Hill is the main card of the UFC Fight Night 177. In addition to the Strawweight fight, Khama Worthy looks for his third consecutive Octagon victory against fellow knockout artist Ottman Azaitar and Ed Herman attempts to continue his improbable resurgence against late replacement Mike Rodriguez If you are a UFC fan, then you simply can’t miss this fight! Watch & Bet on Sports Here =>

What date is the Michelle Waterson vs Angela Hill MMA UFC fight? Saturday, 12th September 2020 or in the early morning of Sunday, 13 September 2020 (for UK viewers).

When is the Michelle Waterson vs Angela Hill fight?

When is the Waterson-Hill fight in MMA? The Strawweight clash between Waterson and Hill will take place on Saturday, 12 September 2020 at UFC Apex Facility in Las Vegas, USA.

What venue is being used for the Michelle Waterson vs Angela Hill fight?

The betting odds for Waterson-Hill are in favour of Angela Hill. She was on a win-streak of three fights before a split-decision ended that run against Claudia Gadelha. Waterson have been losing quite often these days, suffering defeats in four of her last seven fights.

“Overkill” has achieved a lot in the UFC and still has a lot to give at age 34. However, she might never be able to overcome the size disadvantage she has in every strawweight fight. She is one of the best atomweight fighters but outside of that division, there is little hope.

Where can I see Waterson-Hill UFC Strawweight fight in MMA UFC fight for free on TV? Which channels show Waterson-Hill? The Michelle Waterson vs Angela Hill fight is being shown live on BT Sport 1 in the UK.