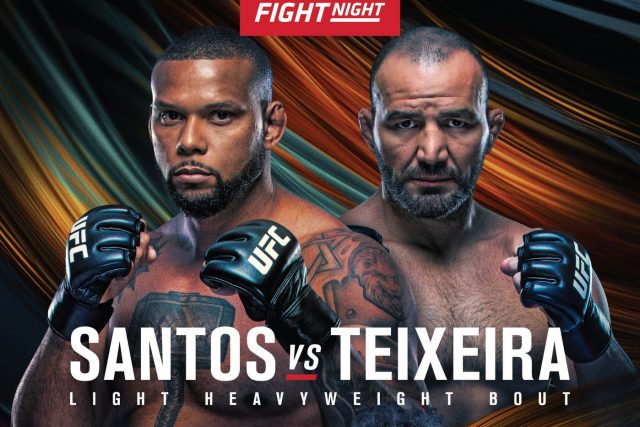 Thiago Santos and Glover Teixeira are set to headline the UFC Fight Night on Saturday, November 8 in Las Vegas. This will be a serious matchup between two of the best light heavyweight fighters in the UFC men’s division. Both of them will be looking to secure their spot in the top five of the pecking order and eventually, make a run for the title.

We saw an exciting round of fights last weekend. Anderson Silva bowed out of a magnificent UFC career with a defeat against Uriah Hall, getting knocked out in the fourth round. Now, light heavyweight fighters, Thiago Santos and Glover Teixeira will be headlining the UFC Fight Night 182 on ESPN. Who do you think will come out the winner, “The Sledgehammer” or a 41-year-old Teixeira?

“I’m feeling great for being 40,” Teixeira told MMA Junkie. “I’ve been told that I’m visibly healthier and more fit at 40 than I was at 37. Back then I was eating too much churrasco and drinking too much cachaca. Today I’m feeling great. People are noticing. My last fight was a great performance against Anthony Smith, who had been beating everyone up except for Jon Jones.

“I’m feeling very motivated. I’m focused on this fight against Thiago. It’s a fight that can propel me to the belt. But I’m not thinking about Jan Blachowicz. I’m 100 percent focused on Thiago ‘Marreta.’”

Fight fans across the world will be tuning in to see this pair step into the octagon and duke it out in the main event of UFC Fight Night 182. Watch Santos vs Teixeira light heavyweight fight free on bet365. All live covering info about TV schedules, TV Channels and other info regarding the Santos-Teixeira UFC Fight Night 182 light heavyweight fight will be provided here.

Santos vs Teixeira fight kicks off Sunday morning, 8 November at 03:00 CEST / 04:00 AM UK time at UFC Apex Facility, Las Vegas, USA. The MMA clash between Santos and Teixeira is the main card of the UFC Fight Night 182. In addition to the light heavyweight fight, we will be waiting to see Andrei Arlovski and Tanner Boser in the heavyweight division. If you are a UFC fan, then you simply can’t miss this fight! Watch & Bet on Sports Here =>

All the TV information you need to know! The anticipated UFC fight between Thiago Santos vs Glover Teixeira is almost here. Silly Season has received questions about the Santos-Teixeira clash in light heavyweight MMA. Questions and answers about the Santos vs Teixeira fight:

What date is the Thiago Santos vs Glover Teixeira MMA UFC fight? Saturday, 7 November 2020 or in the early morning of Sunday, 8 November 2020 (for UK viewers).

When is the Thiago Santos vs Glover Teixeira fight?

When is the Santos-Teixeira fight in MMA? The light heavyweight clash between Silva and Hall will take place on Saturday, 7 November 2020 at UFC Apex Facility in Las Vegas, USA.

What venue is being used for the Thiago Santos vs Glover Teixeira fight?

The betting odds for Santos-Teixeira are in favour of Thiago Santos. “Marreta” suffered a defeat by split decision in UFC 239 to Jon Jones. He overcame several leg injuries to hold his own. Santos is the younger fighter who was on a four-match winning streak prior to his last outing.

Where can I see Santos-Teixeira UFC welterweight fight in MMA UFC fight for free on TV? Which channels show Santos-Teixeira? The Thiago Santos vs Glover Teixeira fight is being shown live on BT Sport 1 in the UK.