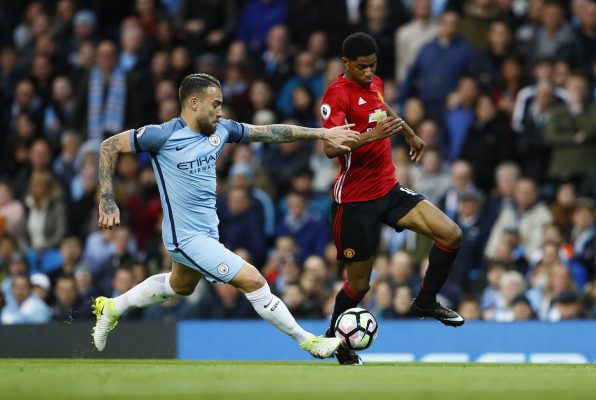 We are backing Man City to continue their 13 match winning run in the Premier League at 2.23 with Unibet. Below you can read the reasons for our Manchester United vs Manchester City predictions.

We expect Sergio Aguero to score first at 4.80 with Unibet

The Manchester City squad are favourites to win this match at 2.23 with Unibet, with Manchester United priced at 3.44 with Unibet to take the three points at Old Trafford.

It’s one of the biggest Manchester derbies in years. City vs United, Guardiola vs Mourinho, and potentially the Premier League title on the line.

The Citizens look unstoppable at the moment, and if they win they will go 11 points clear of their neighbours at the top of the table. Everything really is on the line for United in particular.

The Red Devils have home advantage, but come up against a team who have won every away game they have played so far this season in domestic competition.

City haven’t been quite as free flowing in recent weeks as they were in the first few months of the season, but we think that Pep Guardiola will get it right tactically and take the three points here at 2.23 with Unibet.

It should be an intriguing match up between two of the best tacticians the game has ever seen. However, we think City have that bit of extra quality, especially given United will be without the suspended Paul Pogba.

With so many top attacking players on show it’s hard to predict a first goalscorer. Raheem Sterling is the Blue’s top scorer this season, but Sergio Aguero is often the man for the big occasion and looks a good price at 4.80 with Unibet.

Manchester United face neighbours Manchester City at Old Trafford on Sunday evening. It’s a clash between first and second in the Premier League and one that could go a long way towards deciding the destination of the title.

United are enjoying a good season, and earned arguably their best win of the season last week away at Arsenal before beating CSKA Moscow in the Champions League on Tuesday. However, they are eight points behind City as things stand.

City have been near perfect in the league, taking 43/45 points so far and playing some of the best football the Premier League has ever seen. However, lately a few doubts have arisen following some fortunate late wins and a Champions League loss to Shakhtar Donetsk in midweek.

Manchester United and Manchester City have met 174 times previously, in what is one of the biggest derbies in English football. The Red Devils have the historical edge, winning 72 matches to City’s 50. The teams have also played out 52 draws.

Jose Mourinho still has a number of injuries to deal with, most notably defensive pair Eric Bailly and Phil Jones. Marouane Fellaini is also out, and Paul Pogba will serve the first of a three match suspension. City are missing long term absentee Benjamin Mendy.

The CONCACAF Champions League Is To Resume In Orlando