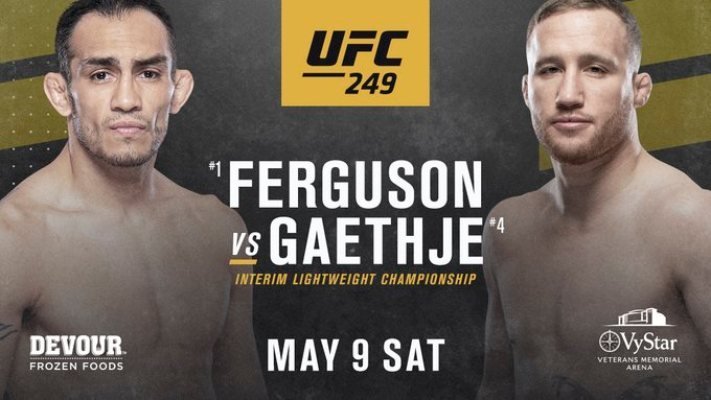 Dana White’s persistence has absolutely flown through this round of UFC. After being cancelled a number of times, UFC 249 is about to take place in Florida on 9th May. Initially, it was supposed to be a title showdown between Gaethje and Ferguson but due to travel restrictions the Russians will not be able to attend. White has managed to set up a card which might be the most stacked in the history of MMA. The fact that Donald Cerrone and Anthony Pettis are jawing it out in the prelims, you know it is going to be an exciting weekend.

UFC 249’s main event between Tony Ferguson and Justin Gaethje is about to be an interim lightweight title fight. Other than Connor McGregor, Gaethje is now the best opponent for Ferguson. Both of them are orthodox fighters who refuse to sit back when placed within the octagon.

El Cucuy claims to be ahead of Gaethje in terms of his match preparation. He is running high on confidence and refuses to be taken out of the cage. Both men are very evenly matched physically with Ferguson on a 12-fight winning streak. If he manages to chop down his 13th opponent, he will become a two-time interim champion just like Justin Gaethje and Conor McGregor.

Ferguson vs Gaethje Betting: How to bet on UFC 249?

bet365 is an UFC-sponsor and have shown many of the top-fights free via live streaming. To see a UFC fight free, you are required to open an account at bet365 and make a deposit. Make a minimum deposit and watch the UFC fight live streaming free in the UK. You are not required to make any bets, but you need an account with money.

There are several markets you can bet on UFC 249 from. Check bet365 TV to see if they show UFC 249 Tony Ferguson vs Justin Gaethje fight via live streaming free – UFC 249 Live Stream Free. bet365 TV=>

The betting odds for Gaethje-Ferguson are in favour of Tony Ferguson. With the ongoing health crisis across the globe, Khabib Nurmagomedov unfortunately, had to miss out. This has quickly made Ferguson the favourite but many would predict that Justin Gaethje has a strong opportunity at an upset.

Israel Adesanya, UFC middleweight champion told FOX Sports, “Gaethje by KO. Not sure which round but I feel he is going to KO Ferguson, crazy fight!”

And UFC featherweight champion, Alex Volkanovski said, ‘I’m already impressed with Tony’s style and his work ethic but what’s even more impressive is the fact he takes these fights, interim champ taking out all the contenders, nothing but respect for the man.

“This is going to be a fun/wild fight, I can definitely see both guys winning but I believe Tony will take over in the second half of the fight with a finish or a decision. Tony keeps proving himself time and time again, hard to bet against a man that is so game and always gets the job done.”

What time will Tony Ferguson vs Justin Gaethje clash start?

Which time will Gaethje-Ferguson fight start? The Undercard’s coverage starts around midnight in the UK. The main event, the fight between Tony Ferguson vs Justin Gaethje, is scheduled to start at after 2 AM UK time and 9 PM/6 PM ET/PT US time. Where to watch and what time? UFC 249 UK Time & TV Channel.

You can also find out how much Ferguson-Gaethje are making at – UFC 249 Prize Money: Ferguson vs Gaethje Bout Prize Money!