The CAF Champions League has produced 57 winners, since its inception in 1965 with Al Ahly being the 57th addition following their win in the 2020-21 season. Al Ahly beat South African side Kaizer Chiefs in the single match format 3-0.

Amongst other remarkable champions, 2016 Champions Mamelodi Sundowns became the second South African side to win the CAF Champions League despite losing 1-0 to Zamalek in Alexandria in the return leg clash.

The Brazilians lifted the trophy with a 3-1 aggregate win to win their first continental silverware in their history.

From the last two editions, CAF kept their final in one match format. It was a two-legged final before. On both occasions, Al Ahly became the champions from Egypt.

Below is a list of previous winners of the continent’s flagship inter-club competition since 1965. Watch & Bet Footboll Live =>

The CAF Champions League is a seasonal association football competition established in 1964. The CAF Champions League is open to the league champions of all Confederation of African Football member associations, as well as to the clubs finishing second in the strongest leagues from the CAF 5-Year Ranking and finally, the defending champions of the competition participate too. Prior to the 1997 season, the tournament was named the African Cup of Champions Clubs

Al Ahly won the title for the 10th time since the inception of the champions league, defeating Kaizer Chiefs in the final, and qualified as the CAF representative at the 2021/22 FIFA Club World Cup, and also earned the right to play against the winners of the 2021 CAF Confederation Cup in the 2021 CAF Super Cup.

Al Ahly won the Super Cup in December for the record 8th time. They lost Super Cup only twice out of 10 appearances. 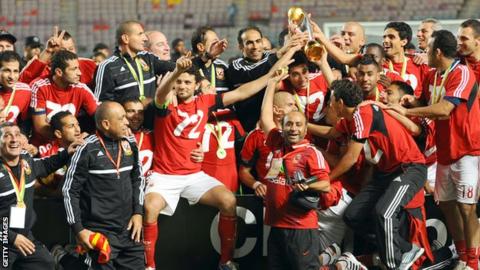 The most successful club in the CAF Champions League have been in their best form in recent years and won the last two editions comprehensively. They also won the CAF Super Cup in December 2021.

Here is the full list of the CAF Champions League past winners since inception 1965 til 1999. Watch & Bet Footboll Live =>

Also Have A Look At Past Winners Lists:

Previously we have published past winners on the following cups and league’s.