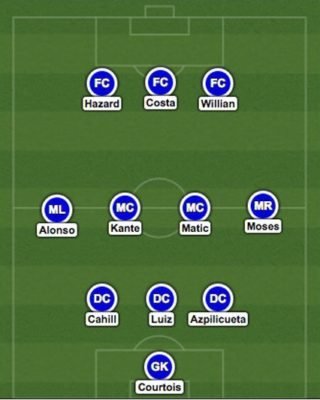 Expected Chelsea XI: Who will start in Antonio Conte’s 3-4-3 against Southampton

Chelsea Starting lineup vs Southampton? Chelsea’s Potential 3-4-3 Starting XI vs Southampton?  The Saints played well against Pep Guardiola’s Manchester City last weekend. Southampton deservedly earned a point. Can they stop the Blues from winning as well? Silly Season take you through Chelsea’s predicted line-up ahead of Sunday’s clash with Southampton away from home at St Mary’s.

Who will start in Antonio Conte’s 3-4-3 against Southampton? Hazard, Costa and Willian should start in the attack. Here is Chelsea’s potential 3-4-3 XI vs Southampton. Moses will return to the starting lineup and play in the 4 man midfield. Expect César Azpilicueta, David Luiz and Gary Cahill in the defense.

Here is the expected Chelsea starting XI vs Southampton:

Eden Hazard has scored in each of his last 2 matches, making him a strong contender for first goalscorer along with Nemanja Matic who has 5 assists to his name already this season. An away win is most likely in this fixture with a price of 7/5 at bet365 =>

The BBC football expert Mark Lawrenson expect Chelsea to be full of confidence and he says that the Blues boss Antonio Conte knows he has a formation that works. Lawrenson think the Blues are capable of doing something no team has done so far in seven matches this season, which is beating Southampton at St Mary’s Stadium. The Sky Sports football expert Paul Merson doesnt believe that and thinks the blues will loose a point at St Mary’s Stadium.