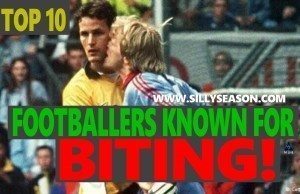 Who are the Top 10 Footballers Known For Biting? Have you ever wondered who are the Top 10 Players Famous for Biting in Football? You may know a few off the top of your head, However, there is a few footballers that you will be surprised to find out that are very well know for taking a bite every now and then in frustration. Football is without doubt the most popular of sports in the world. And not only that Football is one of the sports that has the most controversial moments to happen.

It was not long ago we witnessed the Luis Suarez biting incidence at the 2014 World Cup but will Luis Suarez make this list? that is something you will soon find out below.

We have published the 10 Footballers Who Are Only Famous For One Thing and Worst Fights In Football! if you have not seen them check them out after this list. But until then let’s find out the Top 10 Football Biters. 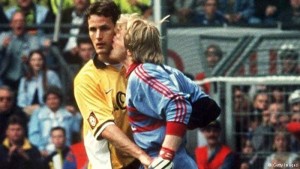 Back in 1999, one of the best goalkeepers in the World was Oliver Kahn, the former German stopper was reported to have bitten his opponent a then Borussia Dortmund player Heiko Herrlich after snubbing his neck in a game he also did a Kung-Fu-style kick to the opponent’s striker though the Germany stopper later said he did all that just to cool pressure as his club Bayern Munchen were down by 2 goals which they later leveled.