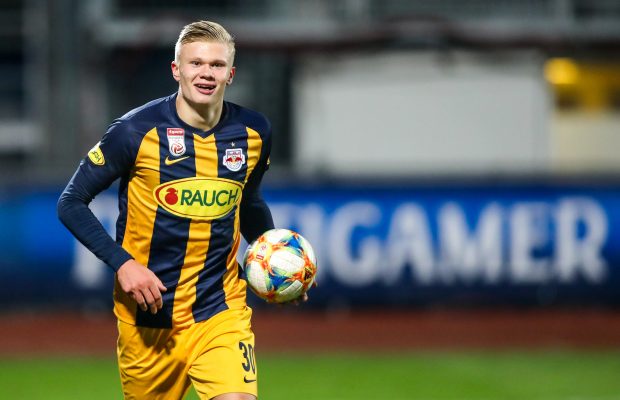 The Norwegian was though to be on verge of joining Man Utd.

Nut now the saga is officially over.

Borussia Dortmund have seen off competition from a host of major European clubs to sign RB Salzburg talent Erling Haaland, the Bundesliga club have confirmed. The Norway international has signed on until 2024, putting an end to the speculation around his future that had been fueled by his scintillating impact with Salzburg in the Champions League.

“I had several intense conversations with the club’s management team, in particular with Hans-Joachim Watzke, Michael Zorc and coach Lucien Favre. Right from the very start, I knew I wanted to move here. I can’t wait to get started and play in front of over 80,000 fans in the incredible Dortmund atmosphere. I’m so excited!”, Haaland told the Borussia official website.

Borussia Dortmund have completed the signing of Erling Braut Håland from @RedBullSalzburg on a contract until 2024! pic.twitter.com/C9ilU0u0dt

Dortmund sporting director Michael Zorc feels the transfer is something of a coup: “We can all look forward to having an ambitious, athletic and physically imposing centre-forward here at the club. Haaland boasts a real eye for goal and impressive speed, and we are confident that we can develop him even further here in Dortmund. At just 19 years of age, he is at the very start of what promises to be an incredible career.”

Haaland only joined Salzburg at the start of 2019 having agreed a move from Molde the previous August, but his form this season has forced Europe’s biggest clubs to take notice. After making only two appearances in last season’s Austrian Bundesliga, Haaland has enjoyed a remarkable rise to prominence by netting 28 goals in 22 appearances in all competitions.

The 19-year-old has put pen to paper on a contract until 2024 and will join Borussia Dortmund in January. BVB saw off competition from the likes of Manchester United, Juventus, AC Milan and RB Leipzig to bring the striker to Signal Iduna Park.