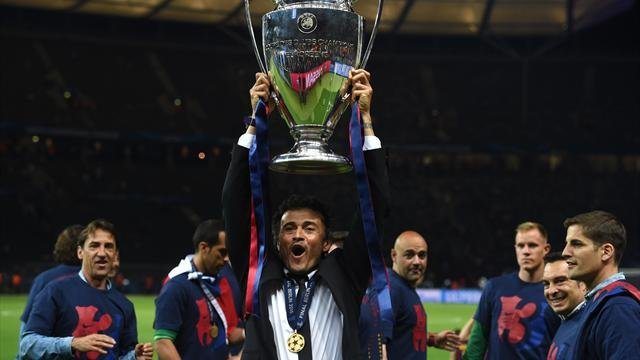 Luis Enrique has just announced he will be stepping down as Barcelona boss at the end of the season.

In the press conference after Barcelona’s game this evening Enrique surprised everyone with the following announcement;

“I want to finish this press conference in a different way,” he said. ”  I will not be coaching Barca next season .” “It’s a very difficult decision. The reason for my decision is because of the way I have to live this profession, intensely and constantly looking for solutions. That means a few hours of rest. I need to rest,”

This is his third year in charge at the world’s best club and in that short time he has an incredible record.

This season they are already in the Spanish cup final. And after tonight’s round of La Liga games, they have moved back into first place after crushing Sporting Gijon 6-1. They look set to do a third league and cup double in three seasons! Their only set back so far is the 4-0 thrashing at the hands of PSG two weeks ago in the Champions League.

The bookies are currently working overtime drawing up lists of potential replacements. The main two candidates are both currently managing in La Liga already. Jorge Sampaoli currently at third place Sevilla has impressed greatly this season and they are only three points behind Real Madrid. If they win tomorrow they will be equal on points with Los Blancos. The second candidate is Ernesto Valverde of Athletic Bilbao. These are the two main favourites but many other names have already been touted.

Arsene Wenger and Ronald Koeman are joint third favourites. Koeman seems to make sense since he was a player for Barcelona. Wenger however, seems a long shot since he has not really impressed for over a decade at Arsenal. Laurent Blanc is the next favourite and he is used to the pressures of managing a big club with demanding fans. Barcelona though expect the best and despite names includind Mauricio Pochettino, Frank de Boer and Jurgen Klopp, it is hard to look past the first two candidates already working in La Liga.

Sampaio and Valverde, whose Bilbao currently sit 8th have both impressed with average squads. Imagine either of them taking over at Barcelona. They will have an infinite amount of talent at their disposal including the top attacking line up in the world, Messi, Neymar and Suarez. On the other hand taking over a team that may have just won their third consecutive league and cup double in addition to being World and European champions in the last two seasons, is not an easy act to follow……