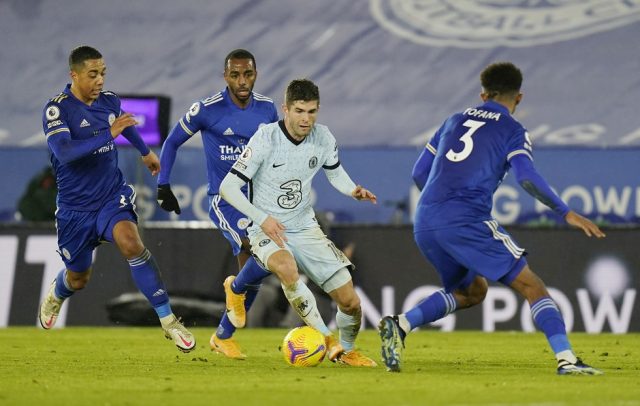 Chelsea players vs Leicester City will be tricky to tell. Brendan Rodgers has to shift his side around to match the tactical nous of Thomas Tuchel.

Kasper Schmeichel is expected to man the goalline. He should be shielded by a defensive three of Wesley Fofana, Jonny Evans and Caglar Soyuncu. Ricardo Pereira and Timothy Castagne should cover the flanks.

Wilfred Ndidi and Youri Tielamans should pair up in the engine room, driving the team’s attack. James Maddison will have to feature either in front of the two or on either flanks.

Jamie Vardy and Iheanacho will be looking to pair up in attack like they have been all season.

The Blues were unlucky in defeat against Arsenal this week but overall, they have been impressive. Tuchel has added a winning mentality back into this squad which can grind out results. Leicester managed an impressive 2-1 win over Manchester United in their league outing to climb over Chelsea in the standings.

Tonight’s match is the 119th meeting between Chelsea and Leicester City. The Blues have collected 57 wins while Leicester City have managed 27 for themselves and the other 34 games ended as draws.