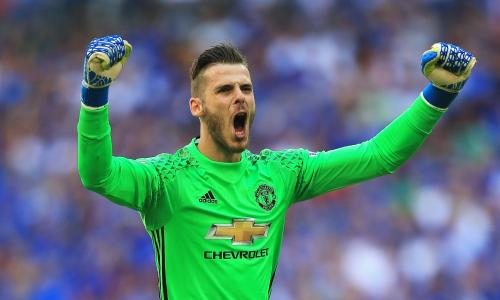 David De Gea has silenced rumours linking him with a move to Real Madrid by insisting he is ‘really happy’ at Manchester United.

The Spain international has been heavily linked with a move to the Spanish giants after they just missed out on signing him with a failed bid last year.

According to reports, Madrid were considering a £43million move for De Gea, who penned a contract extension with the Red Devils in 2015.

The 26-year-old has insisted he wants to remain at Old Trafford for at least the remainder of his existing contract.

“I’m really happy to play for United and Spain and I’m feeling very strong on the pitch. I need to keep this level until the finish of the season.”

United currently sit in sixth position in the Premier League table and travel to the KCOM Stadium on Thursday to face Hull City for the second-leg of their EFL Cup semi-final.

Jose Mourinho’s side will be confident of securing their place in the final at Wembley after easing past Hull 2-0 in the first-leg at the Theatre of Dreams.

De Gea has revealed winning the League Cup would be a massive achievement for him and the team.

He added: “It’s a special game as, if you win, you’re at Wembley and in another final. It is one where we want to be there, of course.

“I really want to win that competition. I don’t have a League Cup winner’s medal ad I am going to be really happy if we win it.

“We are always hungry – we are Manchester United. We’re always trying to be in the finals at Wembley because we always want to win.”