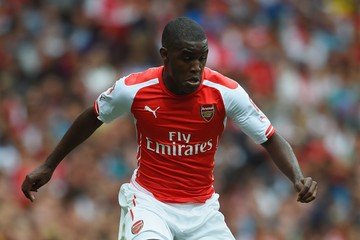 The Italian outfit are now willing to increase their initial offer of £4millon for the 23-year-old, according to reports.

Palermo president Maurizio Zamparini is believed to have previously flown to London to hold talks with Arsenal officials regarding a move for Campbell.

However, the stumbling block was the transfer fee, which was too high for Palermo, but now they are planning to make an improved offer for the Costa Rica international.

Campbell came through the ranks at Saprissa of the Costa Rican Primera Division before moving to the Emirates in August 2011.

He made four appearances for Arsenal before spending time on loan with Lorient, Real Betis, Olympiacos and more recently, Villarreal last year.

Borussia Dortmund striker Pierre-Emerick Aubameyang has been linked with a move to the Premier League outfit if the Gunners fail to sign Real Madrid’s Karim Benzema.

Any move for the 26-year-old could prove costly though after he recently extended his contract until the end of the 2019-20 season.

Arsenal manager Arsene Wenger was planning a £45million move for Benzema but Real Madrid manager Rafael Benitez is confident the France international will remain with the La Liga club.

”He will stay with us. I can’t see any reason why he would leave. We are very happy with him” said Benitez.