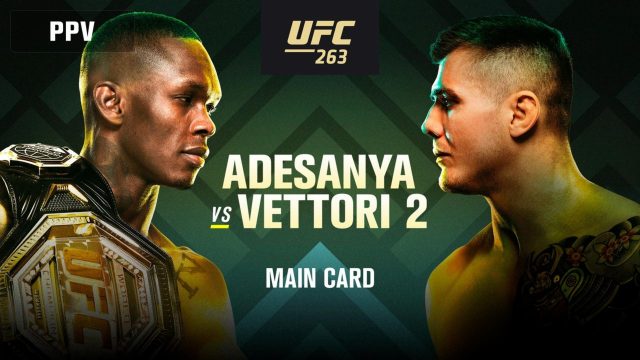 When is UFC 263? Adesanya vs Vettori 2 date? UFC 263 date and time? After rescheduling, when is the UFC 263 fights? We are really in for a thriller this time around with the UFC 263 date, time & location announced.

UFC 263 will be all about the middleweight championship match between Israel Adesanya vs Marvin Vettori. This weekend, we will get to see the UFC return to pay-per-view with two title fights to get you excited. The return of Nate Diaz has been the talk of the town and one you would not want to miss. Watch & Bet on Sports Here =>

2021 started off with some massive names upstaging each other on the white canvass. Now in the fight sheets of UFC, we are ready to see Israel Adesanya return to the 185-pounds division and defend his title against Marvin Vettori.

Adesanya held a perfect record before taking a chance on himself in the light heavyweight division. He faced his first UFC defeat against Jan Bhachowicz at UFC 259 earlier this year. Now, he will look to answer back by taking on a highly motivated Italian.

Vettori suffered a defeat in his first meeting with the 31-year-old Adesanya. He was coming off a 2-2-1 record the last time he met The Last Stylebender. Now, he has put together five straight victories to really put the pressure on. Vettori dominated his last two fights, winning by unanimous decision.

Adesanya vs Vettori 2 Fight Date, Time & Location: When is the UFC 263 date?

Fight fans across the world will be tuning in to see this pair step into the octagon and duke it out in the main event of UFC 263. Watch Adesanya vs Vettori 2 fight on bet365. All live covering info about TV schedules, TV channels and other info regarding the Adesanya – Vettori UFC 263 middleweight fight will be provided here.

This is a defining moment for the ever-so-dominant Israel Adesanya. He will be looking to reaffirm his place amongst the grates with a third straight successful title defence. There might no longer be an aura of invincibility around him but fans have not forgotten just how great of a fighter he is. Add to that Vettori’s insistance that he won the first contest as opposed to the score cards, “The Last Stylebender” has quite a few questions to answer.

Adesanya vs Vettori 2 fight kicks off Sunday morning, 13 June at 04:00 CET / 03:00 UK time at Gila River Arena, Glendale, Arizona, USA. The MMA clash between Adesanya and Vettori is the main card of the UFC 263. If you are a UFC fan, then you simply can’t miss this fight! Watch & Bet on Sports Here =>

When is the Adesanya vs Vettori 2 fight?

When is the Adesanya – Vettori fight in MMA? The middleweight clash between Adesanya and Vettori will take place on Saturday, 12th June 2021 at Gila River Arena in Glendale, Arizona, USA.

What venue is being used for the Adesanya vs Vettori 2 fight?

Gila River Arena will host the UFC 263 gala in Glendale, Arizona, USA, the fight between Adesanya vs Vettori 2.

The betting odds for Adesanya and Vettori are in favour of Israel Adesanya. It is still his fight to lose seeing his track record in the UFC and in the middlweight division.

This is the perfect time for Vettori to fight the 31-year-old considering the loss he just took. That is bound to affect his confidence.