Liverpool and Egypt superstar Mohamed Salah won the award last year following his impressive exploits for club and country. The awards ceremony will take place in Dakar, Senegal on 8 January 2019.

Thomas Patey Nomination, The only Ghanaian 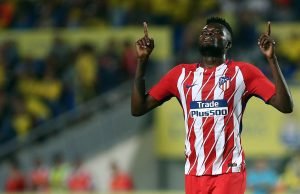 Ghana and Atletico Madrid midfielder Thomas Partey has been named among 34 nominees for the 2018 CAF African Player of the Year award.

CAF announced the list for the prestigious award on Friday with Partey the only Ghanaian on the list.

The Black Stars ace has been recognized following an impressive year with both club and country.  The 25-year-old helped Diego Simeone’s side to win the Europa League and the UEFA Super Cup. He captained Ghana in friendlies against Japan and Iceland in the summer and has become the driving attacking force in the team.The tall list will be pruned down to three before the awards ceremony, which will take place in Dakar, Senegal on 8 January.

The Awards Gala, to honor footballers and officials who distinguished themselves during the year under review, will be held on Tuesday, 8 January 2019 in Dakar, Senegal.

2017 African Footballer of The Year Winner

Who was the winner of the CAF 2017 African Footballer of the Year Award? Liverpool and Egypt superstar Mohamed Salah won the award last year following his impressive exploits for club and country, he scored over 30 goals in the Premier League for Liverpool, helping them finish 2nd in the Premier League and helping the team reach the UEFA Champions League final against Real Madrid.

ALSO HAVE A LOOK AT: