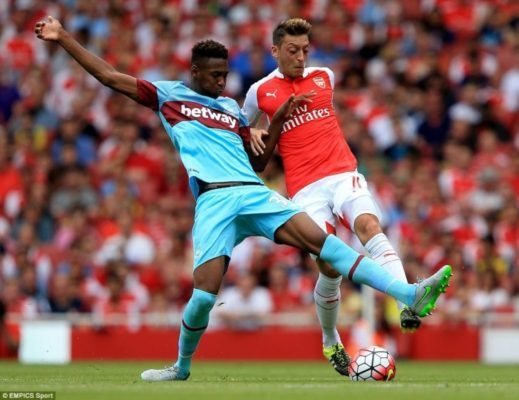 Arsenal are lining up an £8million bid for West Ham United starlet Reece Oxford, according to reports.

Gunners boss Arsene Wenger is believed to be a massive admirer of the young midfielder and is ready to launch a formal bid for him over the summer after seeing him become a fringe player at Upton Park.

Oxford burst onto the scene earlier this season during the opening day of the Premier League against Arsenal. The teenager controlled the midfield at the Emirates Stadium and was voted Man of the Match during their 2-0 winning display.

Youngster On the Fringes

However since that day, Oxford hasn’t featured as often as people would have thought, with Slaven Bilic refusing to use him regularly due to his age.

With Oxford struggling to get regular football at West Ham, he was linked with a loan-move away for the remainder of the season, but as of yet, he hasn’t been able to secure a switch, leaving him stuck with the Hammers.

However, he could be off in the summer with Arsenal chief scout Steve Rowley a massive fan of the 17-year-old.

Oxford’s contract at Upton Park expires in 2018, but it’s believed Arsenal could launch an £8m bid for him over the summer.