The game looked as if it might end in a draw until a late goal from Michy Batshuayi sealed the title for the Blues.

Friday night was celebrated by players past and present – and maybe the future?

Thibaut Courtois streamed a Facebook Live video of Chelsea Football Club stars celebrating after the title winning match, and there was one peculiar individual watching and enjoying the win.

Linked for several months with a summer move to Stamford Bridge, Everton striker Romelu Lukaku watched on as The Blues players partied after their title-clinching win at the Hawthorns.

The Belgium international was seen liking the video and commenting live on facebook, poking a little fun at his fellow Belgium team-mate Michy Batshuayi. 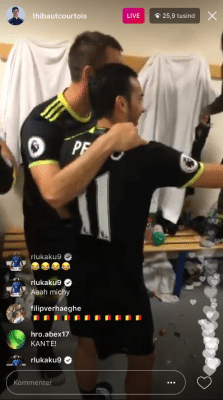 Lukaku commented on the post ‘Aaah michy’ over an image of Blues goalkeeper Courtois and winger Pedro in the visitors’ changing rooms.

23-year-old Lukaku has been seen as an ideal replacement for Diego Costa after the media claimed interest from the Chinese Super League will entice the Spaniard over there, to which Diego Costa has responded to the China rumours,  However, it’s also reported that Manchester United are also rumoured to be after him.

Neymar confirms which club he wants to play for next season

Danny Higginbotham believes this Chelsea star will leave this summer