Diego Maradona has been snapped wearing an Arsenal shirt and says he is a fan.

The footballing legend was pictured wearing one of the club’s official polo shirts as he met Napoli star Arek Milik.

Maradona, who played for Napoli himself, is talked about as one of the best players to ever have kicked a football and he appears to be a fan of Arsene Wenger and his side.

It is not the first time he has been pictured in an arsenal shirt either, after his daughter Giannina Maradona uploaded a picture of her father to Instagram last year – when he was wearing a Gunners training top. 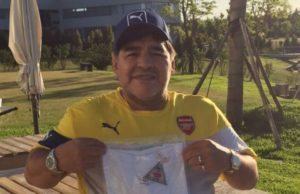 The legendary Argentine has admitted in the past that Arsenal are his favourite Premier League team.

“I am a fan of Arsenal when I am in England,” he said.

“They play beautiful football. They break quickly – they defend and attack as one.”

The 55-year-old also went onto say that he would love the chance to manage The Gunners at some point in his managerial career.

“Of course I would be interested [in working in England],” Maradona said.

“I was looking at Arsenal and Chelsea, and talking to Kevin Keegan.

“Everything [is] so perfect there.”