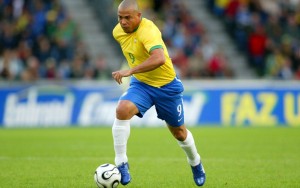 Ronaldo de Lima popularly known as Ronaldo is a retired Brazilian footballer who is regarded by many as one of the greatest footballers of all time by football fans and football experts and is popularly dubbed as ”the Phenomenon”. The Brazilian played for a number of top European sides during his playing career, playing for PSV, Barcelona, Inter Milan, Real Madrid & AC Milan he also played for Cruzeiro and lastly for the Corinthians before hanging up his playing boots in 2011.

Ronaldo was the leading goal scorer of the FIFA World Cup with 15 goals since the 2006 World Cup when he scored his 15th goal before it was broken at the 2014 FIFA World Cup by Germany‘s Miroslav Klose who managed to score his 16th goal. Ronaldo could scored from any position and would play in any football team and could make a difference.

He is also one of the four players to win FIFA Player of The Year more than three times, alongside Lionel Messi, Zinedine Zidane & Cristiano Ronaldo. He also won the FIFA Ballon D’or in 1997 and 2002.