What will be the Leicester City predicted line up for their clash against Tottenham?

Predicted Line up vs Spurs will be tricky to tell. Brendan Rodgers has shown that he has trust in youngsters but he continues to rotate his squad around in the most unpredictable ways since the new campaign.

Foxes is expected to pose the greatest of threats to a dominant side like City but Brendan Rodgers cannot go with his best lineup, given the key injuries on his side.

Are you looking for the line up vs Spurs? The expected Leicester City line up vs Tottenham is here:

In goal, we can expect Schmeichel to start with a four-man defence. Pereira, Soumare, Soyuncu, and Thomas will take the role in defence. Foxes will want their defence to be strong but currently have limited options.

Pereira will play his natural position at right-back. Thomas will be playing at left-back.

A two-man midfield with Ndidi and Tielemans can be expected.

In the wings, we can expect Maddison and Dewsbury-Hall to fill both the opposite flanks. Daka will lead the attack from upfront. 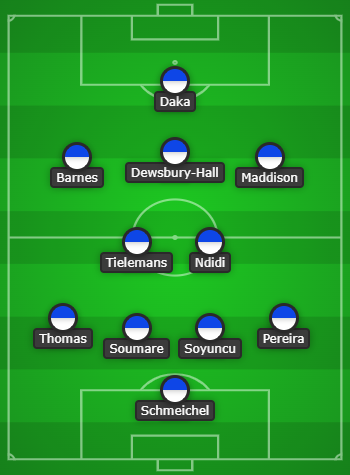 Tottenham are struggling through the covid outbreak and their recent UEFA game was cancelled out due to covid-19.

They also hired a new manager this season so it would be fascinating to see if Conte can win some silverware for the North London club this season.

The Foxes The Foxes managed a 4-0 win against Newcastle after losing to Villa and Napoli. Victory at home can boost their position in points table.

We can expect a tired showing since both sides are struggling through covid concerns. Here, we will give you the answers to the most frequently asked question about Leicester City – Tottenham.

See all Tottenham vs Leicester City Head To Head results.

Head to Head – Leicester City Predicted Line Up vs Tottenham

Ahead of Thursday’s clash between City and Tottenham, we look at the matches the two teams have recently played –

Tonight’s match is only the 117th meeting between these two Premier League sides. Tottenham have managed 58 wins while Leicester City are just two behind with 37. The other 21 matches ended as draws.

Jonny Evans had a hamstring problem, so Boubakary Soumare may be drafted in as an emergency centre-back.

James Justin and Wesley Fofana both are injured.

Rodgers may elect to keep Jamie Vardy among the reserves before clashes with Everton, Man City and Liverpool.

Spurs face a tough task due to the COVID outbreak but they did not confirm which players tested positive for coronavirus.

Sergio Reguilon is expected to be fine despite coming off injured in the Norwich win.

Harry Winks, Tanguy Ndombele and Steven Bergwijn can all earn starts and there may even be a spot for Dele Alli in the lineup.

You can read more about Leicester City: