Liverpool take Manchester United at Old Trafford, in a game which is a must-not-lose for both managers.

The Red Devils currently lead with 77 wins to Liverpool’s just 64. The clubs are also the two most successful teams in the Premier League; between both of them they have won 86 major honors: 44 for Liverpool and with just two behind the mersyside club, 42 for Manchester United.

As well as competing out on the football pitch, both teams are also two of the biggest-earning, and also widely-supported, football clubs in the world of Football.

Both teams have taken seven points from their opening four games having made an almost identical start to the season. They both won their opening two fixtures 1-0, followed by a 0-0 draw in game week three and last time out they were both beaten by Swansea City and West Ham United respectively.

Liverpool will be without their Brazilian star Philippe Coutinho as he begins his suspension following the red card he received against West Ham at Anfield. Defender Jon Flanagan and striker Daniel Sturridge are still recovering from long-term injuries while midfielders Jordan Henderson (foot) and Joe Allen (hamstring) could also miss out.

It will be interesting to see if Louis van Gaal starts David de Gea in goal after his deadline day move to Real Madrid collapsed. Phil Jones and Michael Carrick are the only players on the sidelines for the Red Devils while big summer-signing Anthony Martial could make his Premier League debut.

If you are going to bet on Man Utd v Liverpool game then we have two great offers for you. Money back regardless which team or bet you make.

MONEY BACK AS FREE BET IF BOTH TEAMS SCORE 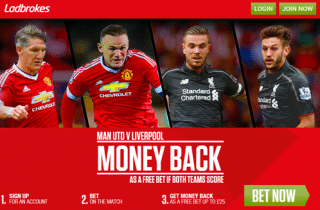