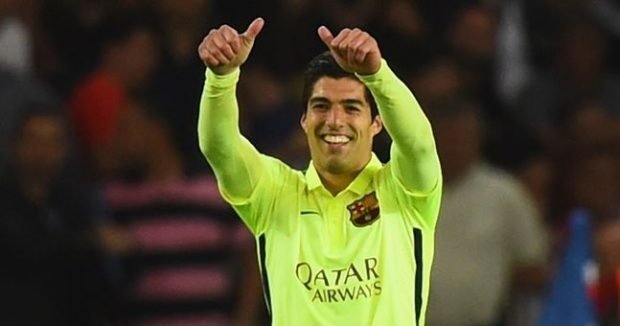 Guardiola is hoping to tempt the Uruguayan away from Barcelona

Manchester City are ready to offer Barcelona £85 million to land the signing of former Liverpool striker Luis Suarez, this summer.

It is a shock move by the Premier League big spenders, who are hopeful that they could tempt Suarez back to the north west of England, after enjoying a successful spell at Anfield.

And Pep Guardiola’s brother, Pere, who acts as Suarez’s agent, could play a massive part in luring the 29-year-old striker away from the Camp Nou, to the Etihad.

However, the stumbling block may not be agreeing terms with Barcelona, but in tempting Suarez away from the Catalan giants, with his wife and family settled in Barcelona.

Guardiola has already beefed up his squad with the additions of Ilkay Gundogan and Nolito, but the former Barcelona boss is hoping to raid his former club for a player that netted 53 times and provided 19 assists in 46 games.

The Spaniard wants to immediately challenge for the title in his first season at the club, after City finished fourth last campaign, and Suarez would be seen a fine acquisition to line up with fellow South American, Sergio Aguero.

Suarez left Liverpool in 2014 for £65 million, but has previously stated Liverpool is the only Premier League side he would play for, after enjoying a good relationship with the club’s fans, through some turbulent spells on Merseyside.