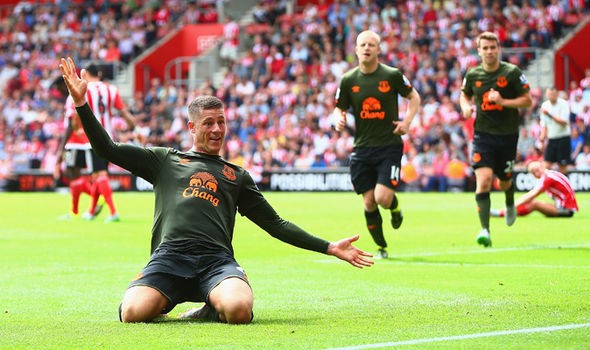 A look back to yesterday’s round of fixtures

As the second round of Premier League fixtures are almost at an end, SillySeason takes a look back at the results from Saturday’s matches starting with the early kick off at St. Mary’s.

This particular result came as a surprise to many football fans looking at this game as a neutral. No disrespect to Everton, but the Saints were strongly fancied to the business at home.

Southampton took the game to their visitors early doors but some solid blocks from centre-back partnership John Stones and Phil Jagielka kept Everton well and truly in the game.

The home side only created one real clear cut chance, Sadio Mane slipped through and shot from the angle, only to see his shot saved by Tim Howard.

Straight after that save, the blueprint of Everton’s game plan was on show as they scored on the counter attack. Arouna Kone broke away down the right flank before before delivering a pinpoint cross for Romelu Lukaku to head in for his first.

Lukaku then turned on the style again just before half time, as Ross Barkley found him on the edge of the box with an intelligent pass and the big Belgian slammed it home for his and the Toffees’ second of the afternoon.

Barkley then turned goalscorer late in the the game, as he was picked out in the Saints’ box before cutting inside and whipping the ball ferociously into the side-netting. Unstoppable.

A full deserved result on a day that Roberto Martinez’s tactics worked a treat, the best way to silence those fans who flew the ‘Kenwright Out’ banner over the stadium before kick off.

Dick Advocaat’s Sunderland are already feeling the pressure after just two games into the new campaign. After staying up by the skin of their teeth last year, it looks as if this season could be no different as they lost at home to newly promoted Norwich.

Following a 4-2 loss at Leicester on the opening day, the Black Cats found themselves 2-0 down at half time thanks to goals from the Canaries’ captain Russell Martin and Steven Whittaker.

Some fans even voiced their disapproval at half time, as they left the Stadium of Light early.

Their misery was compiled in the second half as Nathan Redmond made it 3-0 to the away side, to secure Norwich’s first three points since returning to the top flight of English football.

The only positive for Sunderland was that 21-year old Duncan Watmore scored a consolation goal on his competitive debut.

Not the best start for Steve McLaren in his first away game as Newcastle boss. Garry Monk’s Swansea were far too strong as they followed up their respectable 2-2 draw at champions Chelsea with a comfortable 2-0 victory.

Bafetimbi Gomis and Andre Ayew both followed up their goals at Stamford Bridge with one each again at the Liberty Stadium, they look as if they could be a real threatening and formidable partnership.

Newcastle’s day was summed up by the dismissal of right-back Daryl Janmaat, who was sent off for two bookable offences after being given an awful time by Swansea winger Jefferson Montero.

Tottenham looked to be well on course for their first three points of the season, as they cruised into a 2-0 lead over Stoke at White Hart Lane. Eric Dier and Nacer Chadli put the home side into a 2-0 lead before half time.

They looked to be in complete control of the game, but Spurs’ fans were left with another feeling of disappointment similar to that of the Manchester United loss the previous week.

Toby Alderweireld gave a away a penalty with around 10 minutes to go, which Marko Arnautovic dispatched comfortably to get the visitors back into the game.

The North London side then watched their lead slip as Mame Biram Diouf used his head to get a slight touch on a free kick to make it 2-2.

Stoke were even unlucky to not take all three points as Stephen Ireland almost made it 3-2 in the dying minutes.

No disrespect to West Brom, but Watford will have targeted this game as a chance to pick up maximum points in their bid for survival.

However, it wasn’t to be as Tony Pulis delivered a typical Tony Pulis away performance. Be hard to beat, don’t concede, you’ll either get a point or pinch all three off a set piece.

But it wasn’t to be, as this game fizzled out into a bore draw.

Leicester City surprised many as they climbed to the summit of the Premier League after a win at Upton Park.

Many fancied West Ham to win this one, following their opening day 2-0 victory at Arsenal’s Emirates Stadium, but Leicester had other ideas.

Claudio Ranieri made it two wins out of two in the Premier League as the Foxes’ boss, after they made short work of Sunderland last week; beating them 4-2 at the King Power Stadium.

New signing Shinji Okazaki opened the scoring, before Riyad Mahrez put them 2-0 up before half time with his third of the season.

The Hammers’ new signing Dimitri Payet pulled one back for the hosts, but it wasn’t enough as 16-year old Reece Oxford made his home debut.

Slaven Bilic also lost his goalkeeper Adrian late on, as he was sent off for a challenge on Leicester’s Jamie Vardy.