THERE HAVE BEEN SOME WORLD CLASS FORWARDS FOR ENGLAND! 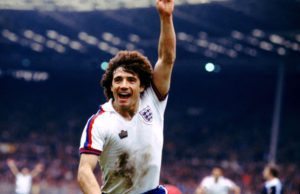 Kevin Keegan enjoyed his best times as a player at Liverpool between 1971 and 1977!

He scored 68 goals in 238 games and was part of the club’s ‘golden’ generation, helping the Reds lift the Premier League title three times and also coming runner-up twice in the space of six years.