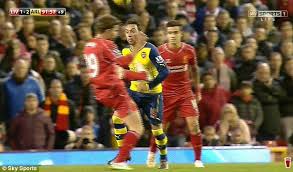 The Liverpool striker was sent off early for revealing the Arsenal Football Club player’s nipple with a high challenge. Borini who was brought on as a substitute in the 74th minute , he then received a second yellow just 17 minutes later for his challenge on Cazorla

Fortunately for him, Liverpool were still able to level the game despite being down to ten men. Thanks to a late Martin Skrtel  header from a corner.

Live Streaming Saudi Arabia vs Germany Olympics Football 2021? How To...