What stood-out from the afternoon at Wembley

The Community Shield is usually seen as a friendly, but when Arsenal and Chelsea face each other, you just cannot use the term friendly and that was proven yesterday.

Although the players on the pitch were well behaved and got through the 90-minutes perfectly fine, the two managers had other ideas after the game.

Jose Mourinho and Arsene Wenger have a long-running rivalry going way back to Mourinho‘s first-stint in England and at Stamford Bridge and after the game yesterday the duo stole the headlines, but probably for the wrong reasons.

Anyway, on the game.

Arsenal lifted the trophy for a second-time thanks to an Alex Oxlade-Chamberlain wonder-goal in the first-half, and despite all the possession going to the Premier League champions, it remained 1-0 to the FA Cup Winners.

But what stood out from the game?

Well SillySeason have put together their top-5 moments from yesterday’s proceedings. 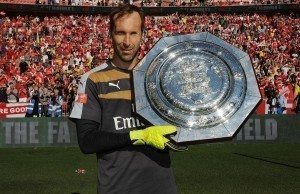 After years donning the blue of Chelsea, it was time for Petr Cech to wear the red of Arsenal in a competitive game.

Cech spent over a decade at Stamford Bridge but yesterday saw him come up against his former-employers for the first-time.

The 33-year-old put in a superb display for his new side and kept a clean sheet at Wembley before lifting the Community Shield at full-time.

A superb save from an Oscar free-kick was the highlight of the day for Cech, but he was quick to thank both sets of fans for their tremendous support throughout the match.

After the game, the ‘keeper took to twitter to thank both sets of fans for the reception and revealed his delight at winning a trophy for Arsenal.

Already looking like a superb signing for Arsene Wenger‘s side and already has the full love from Gooners across the world.