Conor McGregor returns from his third retirement a year after beating Donald “Cowboy” Cerrone. He will be taking on Dustin Poirier after beating him the first time in September 2014.

Headling the event on Saturday will be lightweight titans, Conor McGregor and Dustin Poirier. This will be a battle which will ultimately decide who fights for the title next. If you want to make your pick on the best fighter, read on below! Watch & Bet on Sports Here =>

UFC 257 went through a lot of hoops to finally get here and two big names will be headlining the event – Conor McGregor and Dustin Poirier.

Dustin Poirier has claimed that he will be heading into his rematch against Conor McGregor with the mindset of having a war against “The Notorious One”. The Irishman has predicted a 60-second KO of Poirier and believes he will get the job done quickly at UFC 257.

A veteran fighter Michael Chandler who will be fighting on his first UFC pay-per-view bout will be taking on Dan Hooker in a co-main event. He believes Poirier will give Mcgregor problems in this rematch.

“I do because if you know anything about Dustin Poirier, you know that he thrives in the battle. He relishes the challenge of being in the deep waters, of being cut up and bleeding, and beaten down. Because that’s where he really pulls something out of himself and becomes that champion, that is Dustin Poirier,” said Michael Chandler.

The co-main event will be as exciting as the main one as it gets underway at 02:00 AM UK time on Sunday morning, 24 January.

The McGregor vs Poirier 2 fight kicks off on Saturday evening, 23rd January 2021 at 03:00 AM CET / 03:00 AM UK time at Etihad Arena, Yas Island, Dubai, UAE. The MMA clash between McGregor and Poirier is the main card of the UFC 257 gala. In addition to the lightweight fight in the men’s division, Michael Chandler will be taking on Dan Hooke in the co-main event. Watch & Bet on Sports Here =>

There are several markets you can bet on UFC 257 from. Check bet365 TV to see if they show UFC 257: McGregor vs Poirier 2 fight via live streaming. Unibet TV =>

As it stands, the odds are in favour of Conor McGregor. He is the favourite to win this UFC fight by a significant margin. The betting companies bet on The Notorious One to win. bet365 has Dustin Poirier as the second favourite to win with the odds 3.40 and odds on Figueiredo is 1.33.

The betting odds for McGregor-Poirier are in favour of Conor McGregor. The Irishman apparently had a life-changing experience during his 10 weeks at Portugal. During his stay, he spent his entire time training with his team in a small town 1000 miles away from his home.

McGregor seems to be in the best shape of his life at 32 and claims will make lightweight of his opponent on a late Saturday.

Poirier is the interim lightweight titleholder after getting the decision against Max Holloway. “I’ve overcome adversity so many times,” said Poirier, who made his UFC debut in 2011. “This is my belt, I earned it in blood.” 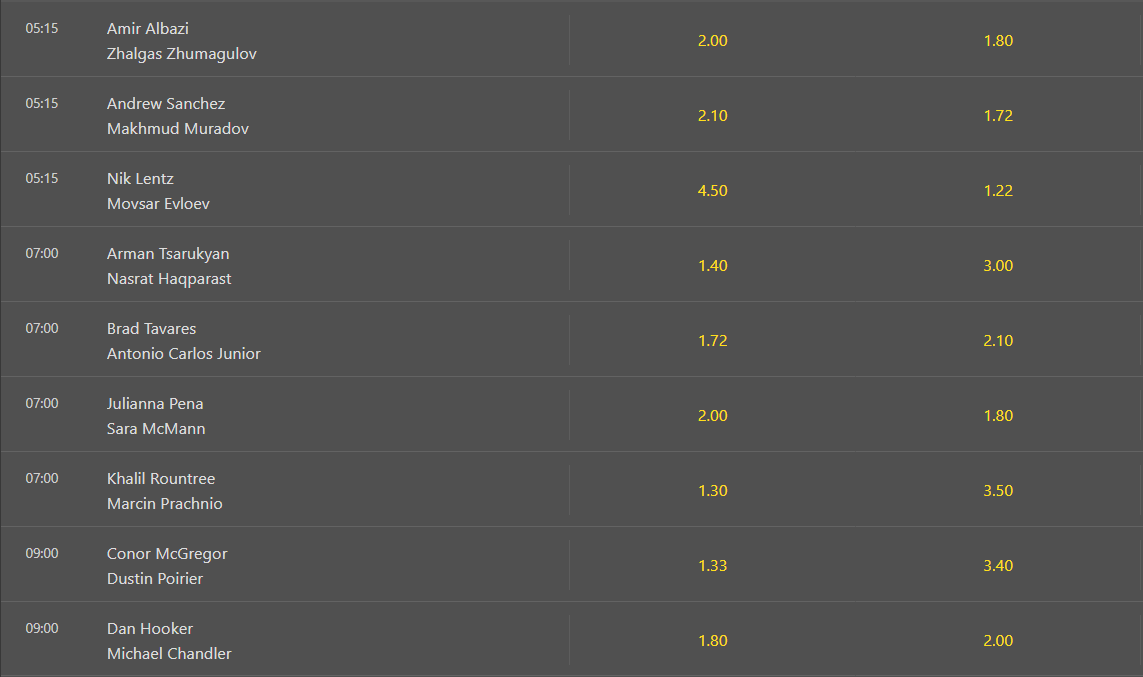 What time will McGregor vs Poirier 2 clash start?

What time will McGregor-Poirier fight start? The undercard’s coverage starts around 11:00 PM in the UK. The main event, the fight between McGregor vs Poirier 2, is scheduled to start at after 03:00 AM GMT UK time and 11:00 PM ET US time (23 January).

McGregor-Poirier UK & US TV does not appear on any ordinary channel that is and the UFC 257 is shown mainly on paid channels and pay-per-view.

Who shows McGregor-Poirier MMA fight on TV in the US and UK?