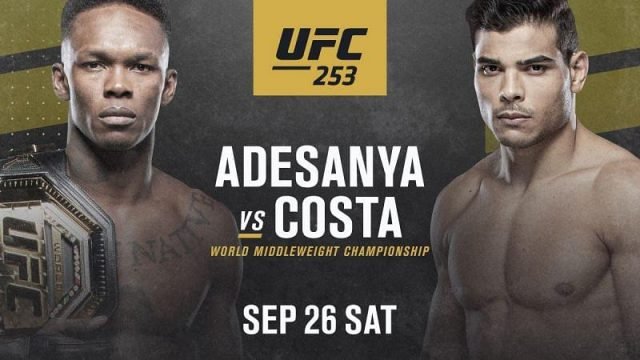 When is UFC 253? Adesanya vs Costa date? UFC 253 date and time? After rescheduling, when is the UFC 253 fights? Dana White’s persistence has paid off in giving us fans exactly what we want – a UFC 253 date, time & location!

After the UFC Fight Night last weekend, where a welterweight tie between Covington and Tyron Woodley went down, we are in for another gargantuan showdown. The rivalry between the former two sparked up a lot of hype which led to Colby Covington getting a step closer to the division title.

Now, it is the final showdown where the ultimate fate will be decided between these two titans – Israel Adesanya and Paulo Costa. Watch & Bet on Sports Here =>

After the UFC Fight Night last weekend, where Colby Covington took down Tyron Woodley, we are set for another exciting showdown on Saturday night, 26 September 2020. Israel Adesanya will be putting up his title defence against Paulo Costa for the main event this weekend. He became the middleweight champion in October by beating Robert Whittaker and then defended his title successfully against Yoel Romero.

A 19-0 career in fighting marks up a giant reputation in the UFC. Costa, while not a champion yet, is also undefeated in his fight career. He is huge for the 185 division, chalking up 11 knockout victories out of his 13 wins. At least one of them will lose the undefeated tag on Saturday night, facing off against each other at the Yas Island in Abu Dhabi, UAE.

The co-main event is about to be headlined by light heavyweight contenders, Dominick Reyes and Jan Blachowicz. They will be competing for the vacant title, left behind by Jon Jones who plans to step up to the heavyweight division. Reyes suffered his last defeat against Jones by decision while Blachowicz has won seven of his last eight bouts.

The main card is scheduled to begin at 03:00 AM (September 27) BST, with a full preliminary card beginning at approximately 10:00 PM ET (USA).

Adesanya vs Costa Fight Date, Time & Location: When is the UFC 253 date?

Fight fans across the world will be tuning in to see this pair step into the octagon and duke it out in the main event of UFC 253. Watch Adesanya vs Costa title fight free on bet365. All live covering info about TV schedules, TV Channels and other info regarding the Adesanya-Costa UFC 253 middleweight fight will be provided here.

We were treated to an absolute smashing contest during Adesanya’s last fight against Cuban juggernaut, Yoel Romero. We can expect the same from this fight against a jacked Paulo Costa. The 6 feet Brazilian is a black belt in Brazilian Ji-Jitsu who also beat Romero last in August 2019 by split decision. All he does is march forward and throws bombs so we can hope to see someone fall over.

Adesanya vs Costa fight kicks off Sunday morning, 27 September at 04:00 CEST / 03:00 AM UK time at Yas Island, Abu Dhabi, UAE. The MMA clash between Miocic and Cormier is the main card of the UFC 253. If you are a UFC fan, then you simply can’t miss this fight! Watch & Bet on Sports Here =>

When is the Adesanya vs Costa fight?

When is the Adesanya-Costa fight in MMA? The middleweight clash between Adesanya and Costa will take place on Saturday, 26th September 2020 at Yas Island in Abu Dhabi, UAE.

What venue is being used for the Adesanya vs Costa fight?

Yas Island will host the UFC 253 gala in Abu Dhabi, UAE, the fight between Adesanya vs Costa.

The betting odds for Adesanya-Costa are in favour of middleweight champion, Israel Adesanya. He is the division’s title-holder after all with one successful title defence under his belt against Joel Romero. Costa is a powerful fighter who is expected to bring the fight to Adesanya but the latter’s counter-striking could work well against the Brazilian.

Where can I see Adesanya-Costa UFC heavyweight fight in MMA UFC fight for free on TV? Which channels show Adesanya-Costa? The Adesanya vs Costa fight is being shown live on BT Sport 1 in the UK.