Alvaro Morata net worth must be quite a lot since he has played only for big clubs right? Wrong!

The Spain international has always been associated with the big clubs. He was a boyhood fan of Atletico Madrid and grew up supporting them. However, it was Real Madrid who poached him as a prospective youngster. Morata was then geared into the first team. He then later went on to play for Juventus and Chelsea as well, the two most successful clubs in their countries respectively, in the last decade.

Finally, in 2019, he made an emotional debut for his favorite club Atletico Madrid. He is currently playing there now.

Well this is more of common information. What we will also discuss here besides his football life, is his personal life – his house, his wife, his Instagram profile and how much he earns! Well then let’s get started.

How much is Alvaro Morata net worth? As mentioned before, his net worth is comparatively low for a player who has only played for a big club. As of 2020, his net worth stands at $23 million. The Spanish striker is one of those players, who took a pay cut when he left Chelsea and joined Atletico Madrid simply because he was so desperate to play for the Spanish club.

His net salary at presents is just a little over $7.2 million at Atletico Madrid. It means his salary is roughly about $150,000 per week at the club! It is a $50,000 per week deduction from his wage at Chelsea.

Alvaro Morata recently scored his 100th club goal. He has also made 31 assists. The stats are not good for a 27 year old striker who has played over 300 games on a club level. For Spain, he is currently the number one striker due to an injury to Diego Costa who just returned to full fitness!

In the national team, he has an impressive stat scoring 17 goals in 33 games!

The Spanish striker is a modern day forward who does not like much of a physical tussle but thrives on technique and pace. He has a good turn of pace, a good ball control, and a neat finish. He hates being bullied by defenders and this is probably why he did not do well in the Premier League once the defenders figured him out.

Until then however, he was impressive. In fact, he scored 10 goals in his first 9 games in England for Chelsea. Here is a look at them:

Morata has been unlucky on two aspects of his career. The first one is that since he has only played for big clubs, he has never been given time to settle or develop. Secondly, he has always had a bad injury track record.

After scoring 10 goals for Chelsea in his first few games, Morata lost his place in the side due to an injury. He made a quick comeback but had not recovered completely. It was visible in his bad run of form and his lack of confidence. Ultimately it led to the demise of his club career at West London. Even now at Atletico Madrid, he has had multiple injuries.

Morata’s worst injury is the back injury from which he keeps suffering time and time again.

The player has already had 4 major transfers and he is only 27 years old. His transfers have brought in major money to clubs while on ocassions a club has used their buy-back clause to rope him back in. He finally found the most satisfying move of his life when he permanently joined Atletico Madrid in 2019 summer from Chelsea. Here is a look at his transfer history!

Alvaro Morata joined Chelsea for an expensive fee. His initial fee was £59 million with other bonuses. Back then Morata was in a good form and upcoming prospect. He had recently joined Real Madrid from Juventus after a rich vein of form but due to lack of game time at Santiago Bernabeu, he joined Chelsea who broke their bank to get him. 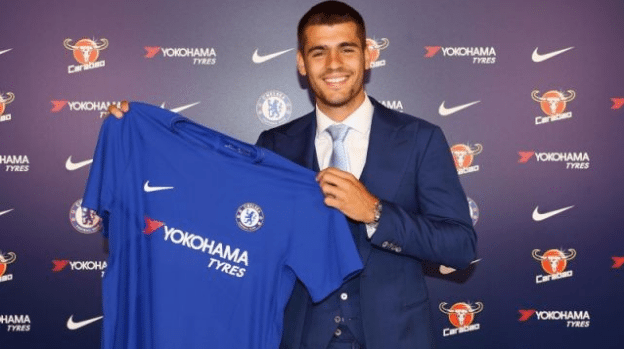 He started brilliantly for the Blues by firing in 10 goals in his first 9 games and assisting 3 more! However, what followed were injuries, mental degradation, lack of confidence and it all got reflected in his game. Goals dried up as he started blaming everybody from managers to fans and left England 18 months later as a depressed man. He only scored 14 goals after that in the next 14 months after his initial burst of form for Chelsea.

The transfer clearly failed for the Blues but they managed to get a good price on him.

Morata was an Atletico Madrid fan as a boy growing up in Madrid. He however, was picked up as a kid by Real and finally found his way home in the darkest time of his career. Away in England, in a cold country, where he could not adjust his life or his game, Morata was lost. It was then that Diego Simeone showed him love and trust and signed him on an initial loan fee of £6 million in January 2019.

The loan is due to expire in the summer of 2020 after which Morata will stay back in Atletico Madrid itself. The reason is that in summer 2019, Atletico agreed to pay Chelsea a hefty £60 million for the permanent transfer of Morata when the loan deal expires.

Morata agreed to a wage cut of £50,000 per week on his 5-year contract which adds up to £12,500,000 less over the period of time. The striker is slowly getting back to form to a new look Atletico side and has most definitely looked happier if nothing than his time at Chelsea.

This was the club that used him the most and gave him nothing. Real Madrid signed Morata as a Castilla product and then inducted him into the first team. A young Morata was up against prime Cristiano Ronaldo and Karim Benzema and without any scope to make a mistake, the pressure was too much on him. He eventually started to fade away as a youngster itself before Juventus took him away.

Real Madrid charged £18 million for the move and Morata discovered his potential at Juventus where he played brilliantly! However, watching Morata thrive envied Real who immediately used their buy-back clause and re-signed him for £27 million. Morata was visibly unhappy but admitted he could nothing as legal matters had to be respected.

At Madrid, it was once again the same story as Morata, a young lad who quenched for football was made to warm the bench time and time again. Zidane decided to finally sell him and Morata’s growing reputation as a brilliant striker meant that Real charged Chelsea £59 million with a possible £12 million add ons, which fortunately the Blues did not have to pay.

So in total, Real made a £50 million profit on a player and ruined his career as much as they could before letting him move on completely.

This was the only club besides Atletico Madrid, where Morata looked at him. He spent two seasons there and in that time, the world saw what Morata can become. Morata was signed as a 21-year-old prospect and left Turin as a developed striker ready to fire for a big team. He won two Serie A league titles there with the Old Lady.

Morata is married to his long time girlfiened Alice Campello. The couple have kids together as Morata and Alice are very public about their family time and family love. They are very close friends with Isco and his girlfriend. Morata openly thanked Alice for being his support system mentally during his horrendous time at Chelsea where everything seemed to go wrong for him!

Morata has a fan following of 10.9 million on Instagram which is one of the highest for Spanish players. Morata recently dedicated a post to his father – which was very heartwarming. He often posts about his wife and kids and Atletico Madrid. He also has a paid partnership with a few brands for whom he posts and earns quite a bit of money!

This is another spine chilling story. When Morata was on the verge of making his Atletico Madrid move permanent, his family and him were living in Madrid in a beautiful house.

However, there was an armed robbery at the house, from which thankfully everybody escaped unharmed. Soon after Morata and the missus put up the £3.5 million house for sale!

Alice Campello spoke on Instagram about the terrifying experience.

“Knowing that you have your children at home and thinking they can touch them or do something to them is really inexplicable.

“Fortunately we are all well and could have been much worse. They have stolen so many memories but it’s gone.

Well that was quite a story which brings us to the end of our Morata piece! However, here are some other players who we bet you would love to read about!

Paul Pogba net worth: How much is Paul Pogba worth?