Liverpool will look for three points away at West Ham on Sunday afternoon as they try and get their push for Champions League qualification back on track. Their draw with Southampton wasn’t the best, but they are just 2 wins away from confirming a top 4 finish for this season.

Here is our preview and predictions for the upcoming Premier League game West Ham v Liverpool. The game is at 2:15pm on Sunday 14th May at the London Stadium. 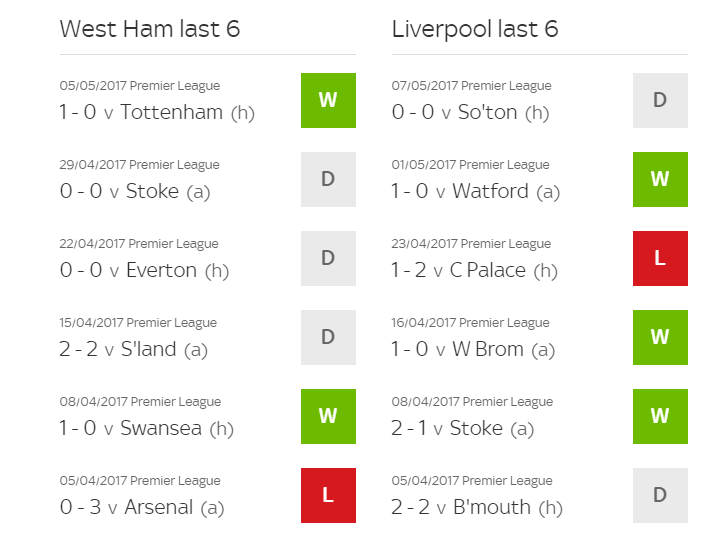 When is the West Ham v Liverpool game?

The game is at 2:15pm on Sunday 14th May. It is at the London Stadium, home of West Ham United.

What TV channel is West Ham v Liverpool on? How to watch to the match.

The match will be broadcast live on Sky Sports Super Sunday in the UK. If you’re not in the UK or not a Sky customer, it’s alright, we’ve got you covered, check out our streaming links below.

For the home team, Diafra Sakho, Andy Carroll, Michail Antonio and Pedro Obiang will all miss the game. It will be a tough one for Slaven Bilic based on these absences and he will wish he had those players available.

Liverpool of course are without Jordan Henderson and Sadio Mane for the clash, who both appear to be out for the rest of the season. Other than this, they have no new injury concerns. Adam Lallana could be set to make his first start for the team since his thigh injury picked up in March.

Here are some Premier League bonus offers for Gameweek 35: