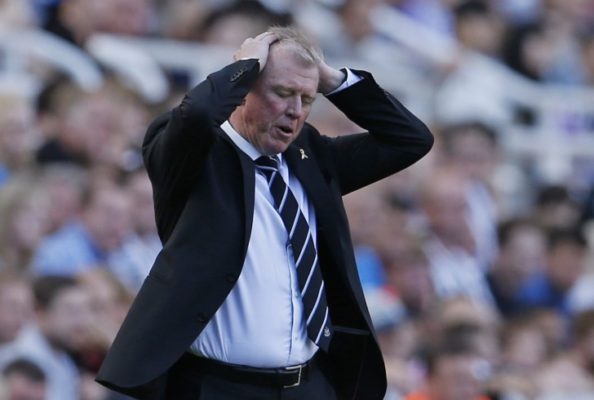 Sergio Aguero scored five times in 20 minutes as Manchester City came from behind to thrash Newcastle 6-1 and return to the Barclays Premier League summit.

Aleksandar Mitrovic had given the win-less Magpies a shock lead at the Etihad Stadium but Aguero stunned the visitors either side of half-time with a nine-minute hat-trick.

He bagged two more before being substituted in the 66th minute, while the in-form Kevin De Bruyne was also on target as Newcastle went bottom.

Chelsea once again capitulated and were booed off as Southampton won at Stamford Bridge for the first time in almost 14-years to leave Jose Mourinho contemplating a fourth loss from eight league games this season.

Captain John Terry was restored to the starting line up but the Saints exposed the now familiar failings in the defence which just five months ago formed the foundation for winning the title.

Chelsea have conceded at least two goals in seven of their eight Premier League games this season – the exception the 2-0 defeat of Arsenal – and time and again Sadio Mane, Graziano Pelle and Dusan Tadic found holes in a 3-1 win.

Willian scored a fourth free-kick goal in four games to open the scoring, but Chelsea afterwards scarcely tested Maarten Stekelenburg as they fell to a first home loss to Saints since January 2002.

A rare Steven Davis goal levelled matters and Mane put the visitors ahead after mistakes by Gary Cahill and John Terry, before Pelle got Southampton’s third.

Sunderland edged above their rivals with a 2-2 draw at home to West Ham but a first win of the season was let slip.

Steven Fletcher and Jeremain Lens put the Black Cats two up in 22 minutes, the latter with a lovely chipped finish.

But Carl Jenkinson pulled one back in first-half injury-time, Lens was sent off for a second yellow card and Dimitri Payet levelled on the hour.

Crystal Palace moved third in the table after a 2-0 home win in the early kick-off against West Brom.

It was 0-0 until the 68th minute, when Yannick Bolasie netted, and Yohan Cabaye‘s late penalty sealed it.

By then the Baggies had already lost Jonny Evans and James Morrison to injury.

Leicester, beaten by Arsenal last time out, returned to winning ways with a 2-1 success at Norwich.

Jamie Vardy won and converted a debatable penalty in the 28th minute, taking his tally to seven in eight appearances this season, before Jeffrey Schlupp doubled the lead.

Dieumerci Mbokani‘s first goal for the Canaries reduced the arrears but there was no equaliser.

A solitary strike from Marko Arnautovic saw Stoke take a 1-0 win at Aston Villa, who remain in the bottom three after failing to find a way past Jack Butland.

Arnautovic, who had earlier been denied by a marginal offside decision, beat Brad Guzan 10 minutes into the second half to hand the Potters a first away win since the same fixture in February.

Glenn Murray opened his Bournemouth account in the 1-1 draw against Watford at Dean Court, but missed a penalty to win it late on.

The Hornets were gifted their equaliser when goalkeeper Artur Boruc misplaced his kick to striker Odion Ighalo.

Everton and Liverpool fought out a Merseyside derby at Goodison Park in what proved to be Brendan Rodgers‘ final game in charge of Liverpool.

Everton looked the stronger and more likely winners as the game progressed, and Rodgers was sacked an hour after full-time.

Tottenham extended their unbeaten Premier League run to seven games as two superb free-kicks from Christian Eriksen earned them a point at Swansea.

Andre Ayew’s header gave the Swans the lead before Eriksen levelled with a swerving effort from 25 yards.

But Eriksen found the top corner from range to lift Spurs to within two points of the top four.

Swansea, who move up a place to 11th, remain without a victory in nine attempts against Spurs, dating back to their first season in the Premier League.

And finally, Arsenal stunned Manchester United with three goals in the opening 20 minutes as the Gunners moved up to second in the Premier League table.

United had no answer to Arsenal’s opening burst as Alexis Sanchez and Mesut Ozil scored twice in 74 seconds.

Sanchez added a third from 18 yards as the Gunners beat United for just the second time in 14 league meetings.

United improved after the break but Arsenal substitute Alex Oxlade-Chamberlain hit the crossbar late on.