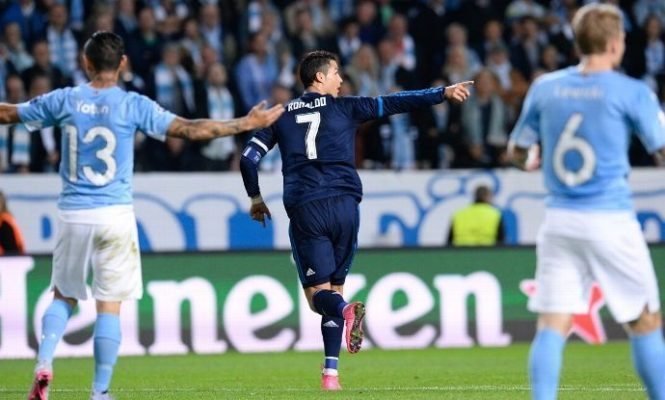 After going three whole games without a goal for the Los Blancos, Cristiano Ronaldo finally netted a brace for Real Madrid ina 2-0 victory against Malmo in the group stages of the UEFA Champions League on Wednesday night.

Cristiano Ronaldo’s milestone achievement of 500 goals came just after 753 games, He has scored five goals for Sporting Lisbon, 55 goals for Portugal, 118 for Manchester United and 323 for Real Madrid to make it a total of 501 goals in just 753.

Cristiano Ronaldo who joined Real Madrid in 2009 for the then world record fee of £80 million from Manchester United has established himself as a legend at the  Bernabeau, His 230 goals in 208 La liga games puts him third place as All time leading la liga goal scorer behind Hugo Sanchez (234 goals), Telmo Zarra (251) and Barcelona striker Lionel Messi, who tops the charts with 289 in 321 games.

After his brace tonight Cristiano Ronaldo went on to thank his teammates for helping him reach these figures and break records, saying it’s an honor to play with them and he is very happy.

The Portuguese is also the All time leading goal scorer in the Champions League with 82 goals ahead of Lionel Messi who sit’s in second on the charts with 77 goals.