Reports from the Express claim that Chelsea Striker Diego Costa has agreed to stay at Stamford Bridge.

It seems good news has emerged for Blues fans that the Spain International has decided that he is keen to be apart of new Blues Boss Antonio Conte’s plans for next season.

Costa, 27, has been the subject of much speculation surrounding a move back to former club Atletico Madrid after having struggled in his second season for the Pensioners, The Brazilian/Spanard only scored 12 league goals as Chelsea Football Club went onto finish a shocking 10th spot in the Premier League.

It was also widely rumored that he was unhappy at Chelsea Football Club and had started talks with Club Atlético de Madrid.

Costa is currently on holiday after being left out of the Spain International squad that Vicente del Bosque took to the France for the EURO 2016 tournament.

Despite having a somewhat a disappointing season in the Premier League 2015/16 season, Costa is reportedly keen to get back on track and help guide Contes Chelsea squad to BPL success.

Whilst on holiday, the 27-year-old posted a picture on his Instagram fueling more speculation about his future with the London club. 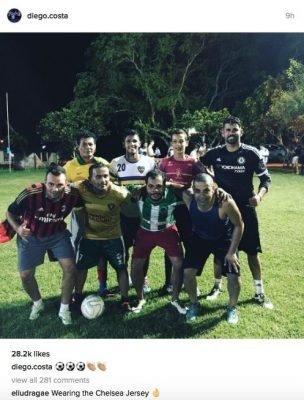