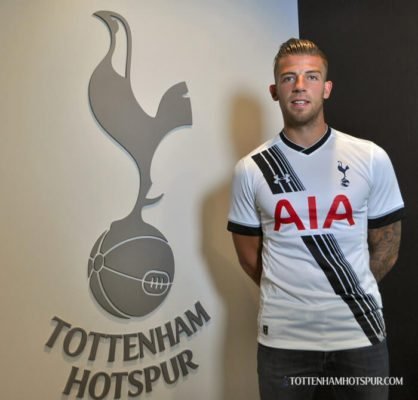 Tottenham Hotspur have this morning announced the signing of Toby Alderweireld from Atletico Madrid, on a contract running until 2020.

The defender spent last season on loan at Southampton where it looked like he would remain on a permanent basis, however Spurs nipped in ahead of the Saints before they could make the move long-term.

Southampton had threatened taking legal action over Tottenham and Atletico after it seemed the Spanish club were too late in activating a clause which ended Saints’ option of signing Alderweireld permanently, however this didn’t stop Tottenham proceeding with the deal.

The fee is believed to be in the region of around £15 million and it completes Tottenham’s defensive restructure after the club also signed Kevin Wimmer and Kieran Trippier this summer.

Alderweireld will join up with a few familiar faces at White Hart Lane where he will again link up with Christian Eriksen and Jan Vertonghen from his Ajax days, as well as Belgian compatriots Moussa Dembele and Nacer Chadli.

After arriving at the North London club, the centre-back had this to say to the club’s official website: “I’m very proud to become a Spurs player. I’m very happy to be here and I hope to have a wonderful time with this team.

“From the beginning I knew a lot about it (the club) from Jan Vertonghen, Mousa Dembele and Nacer Chadli.

“It’s a big club and it’s always been a dream to play at a club like Spurs. Now that dream is coming true so I’m very happy, very proud and I will give my best.

“I know the players from the national team and I played with Jan at Ajax, we had a central defensive partnership,” he added.

“It’s nice when you join another club that you know a couple of players. I hope to get to know them a little better now.”

“There is a lot of quality in the team and good, young players the club also wants to develop. Those two games were very tough for us, Spurs had a very good team.

“I’m really looking forward to helping the team reach the goals we will set.”