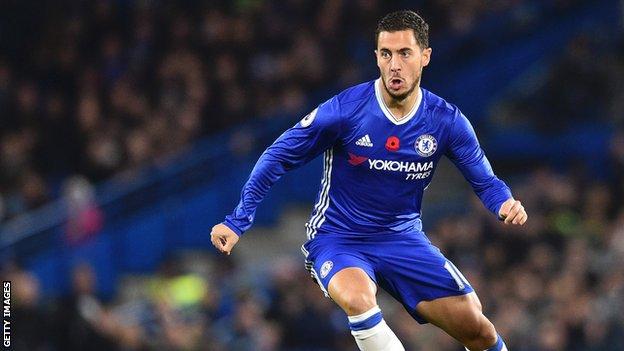 Chelsea star reveals coach brings out the best in him

Chelsea star Eden Hazard has revealed that Belgium coach and former Arsenal star Thierry Henry is the man who brings out his best form.

The winger started for his country last night as they humiliated Estonia with an 8-1 scoreline.

Hazard got onto the scoresheet but had to go off with 15 minutes to go limping. It’s thought he has suffered a small injury blow.

After the Estonia thrashing, manager Roberto Martinez said: “Eden Hazard has no injury, but received a kick on the calf.”

His knock will have Chelsea worrying with their star man in top form again this season after struggling last campaign. Blues boss Antonio Conte will want to ensure there are no issues with Hazard’s fitness ahead of their trip to Middlesborough on Sunday.

Hazard praised his coach Henry for his return to form.

“Everyone knows my love for the French team,” Hazard said. “When I was younger I watched more of Thierry and Les Bleus than the Belgium team.

“So it is a pleasure to have him as a coach – he teaches us a lot.

“Even if he is not always there during training sessions, his presence in the set-up alone brings out the best of us.”